Of Serendipity and Starry Nights 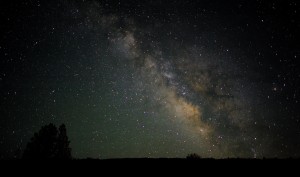 Decembers are a poignant time of year, as we reflect on the receding shores of time, it is as if with each year one wave of our life disappears into the distant horizon. This December, my reflection took me down the path of adolescent nostalgia – by returning me to my childhood meditation over starry nights. Growing up in Pakistan and being raised by a single mother, I have spent many a night staring into the Islamabad night sky. Until one evening during my moments of soliloquy to the night sky, a moment of epiphany occurred: even the night sky – dark and sinister – has stars. Thus, in contrast to the blackness of the sky that I associated with the bumps along my personal journey, stars at the time symbolised hope and positivity and a certain cheerfulness.

Analogising this reminiscence of starry nights to today’s world, I look back at 2015 as depicting a particularly dark year. What appears to be emerging is an increasingly fractured and polarised world. The increasing perplexity of terrorist attacks and the corresponding rise in Islamophobia, with unrest and anarchy rife in the Middle East, the war against ISIS, the growing tide of sectarianism in Muslim-majority lands, the rise of ideological extremists – one advocating a militant form of, what is, Islam in their view (militant Islamism) and the other going down the path of Donald Trump, Geert Wilders, Pamela Geller and the like (or what I call Trumpism). Between this disdainful exchange between militant Islamism and Trumpism, the values of human dignity and civic virtue that are common to humanity are paradoxically being eroded to an unrecognisable degree.

While I don’t believe an apologetic Muslim rhetoric is required to counter episodes of Islamic extremism given the geopolitical forces that have shaped its contours in the past three decades, I believe an emphatic, academic and theological counter narrative is needed in response to the pernicious extremist narrative taking hold. The moderate Muslim voice – scholars, educators, activists, professionals and all peaceful law-abiding citizens alike must take the mantle of providing this counter narrative within their respective spheres of expertise and social and professional circles. And while this is a call to action for the moderate Muslim voice, it is equally a call to the media to ensure such a voice receives a channel that safeguards non-partisan scholarship. Unless the media takes a proactive role in providing such an impartial mechanism where the moderate Muslim voice does galvanise, all will be lost like echoes bouncing off empty walls.

And hence my quest to mobilise the moderate Muslim voice is a bit like looking for stars in the night sky. These stars may be human or literary – but it is time for them to emit their light. The most powerful beacon comes from the Quran itself, wherein God, entirely antithetical to ISIS’s actions and theological premise, provides that the Prophet is merely an admonisher and has no authority to compel people to believe, “Thou art not at all a warder over them.” The general thrust of the Quranic message may be summed by the thirty-fourth verse of Chapter 41, commanding the believers to repel evil with that which is best. Perhaps the greatest advocacy of preserving and peacefully co-existing within multifaith communities comes from the Quran itself – quite ironically in light of current world events – Chapter 22, verse 40 reads, “For had it not been for Allah’s repelling some men by means of others, cloisters and churches and oratories and mosques, wherein the name of Allah is oft mentioned, would assuredly have been pulled down.”

To be sure, we are not just fighting radicals donning arms, the radical clergy in Muslim-majority countries, particularly Pakistan and Saudi Arabia – and now spreading to others like Bangladesh and Malaysia, that has led to the development of a virulent interpretation of religion remains an equally formidable adversary. These so-called scholars of Islam are hardliners that continue to capture the imagination of many vulnerable followers – the phenomenon is described well by Khaled Abou El Fadl, Professor of Law at UCLA School of Law who, quoting Sohail Hashmi writes that, “…interpretive communities do form around texts, and at times, they may hold the moral insights of the text hostage.” The uncompromising fashion in which hardliner clerics have slapped their interpretations of Quranic discernments onto “Islam” is a quintessential example of holding its insights captive. Importantly, what Fadl and Hashmi both underscore is that, “as Muslim intellectuals we must admit that the morality of the Qur’an exceeded the morality of its interpreters.”

Thus, part of the journey of the moderate Muslim voice should be to transcend ideological barriers and embrace the diversity and plurality of peoples. This spirit of celebrating multiculturalism and fostering social cooperation is endorsed in the Quran, God stating quite clearly that, “If thy Lord had so willed, He could have made mankind one people…” and in another place adding that God grouped people in various tribes and nations so that they “may know one another.” Therefore, as Fadl expounds that, “the reality of human diversity is part of the divine wisdom and an intentional purpose of creation.” Within classical Islamic jurisprudence, commentators have failed to explore this Quranic discourse on diversity and hence the onus is on contemporary scholars and jurists to take up this cause. In order to undertake this journey in any meaningful manner, Muslims must first shed their self-righteous egos and their leaning propensity towards determining who in their view is a good Muslim, or even a Muslim in the first place. Let it be God’s exclusive dominion to sanction the same – indeed, the jurisprudential notion of the rights of God (huquq Allah) testifies to this – i.e. only God may determine retribution for any violation of rights due to Him and only He may forgive any transgressions. In fact, the rights owed to people (huquq al ibad) take precedence over the rights owed to God – a notion well established in Islamic jurisprudence.

Hence, as we endeavour to embark on this journey of searching for stars in the night sky, let us remember the Islamic metaphysical journey of finding opportunity in adversity, of having the fortitude to perceive the majesty of a bougainvillea flower sprouting from a thorn, of remembering that night turns into day and of displaying the courage to think that the sun does shine through otherwise rain-filled clouds – it is this depth of perception and inner strength that possesses the resilience to transform dark night skies into meteor showers. And it is this steadfastness that transcends barriers – reminding us that while serendipity may be a good thing at times, we mustn’t wait for it to work its magic.

4 Responses to Of Serendipity and Starry Nights