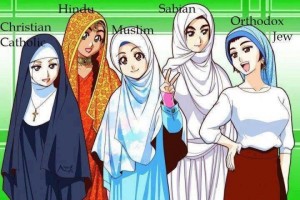 3 Responses to Hijacking the Hijab – the Religious and Liberal Paradigms