Shumaila Jaffery’s poignant piece on Aasia Bibi and Pakistan’s blasphemy laws for the BBC last week stirred within me an unexpected nostalgia. Its thoughtful narrative served as a reminder of many personal experiences living and growing up in Pakistan as an Ahmadi Muslim – not just my own but those of my ancestors. It spoke to a crisis of identity that has taken on many hues through my journey of living in my homeland for 28 years, finally leaving in 2012. This journey was often peculiar in its challenges but always profound in its lessons.

During the tumultuous division of the Sub-Continent in 1947, my grandparents’ families were among scores others that had to leave all their personal belongings and their home in a small town near Amritsar and board a train to start a new life in what was now a new country – Pakistan. They hailed from the Ahmadiyya Muslim Community, a minority sect in Islam, and a separate homeland for Muslims to thrive in came with a promise of freedom.

The essence and spirit of such promise was palpable as Jinnah’s message infused with hope delivered to Pakistan’s Constituent Assembly on 11th August 1947 reverberated through the nascent land: “You are free; you are free to go to your temples, you are free to go to your mosques or to any other place or worship in this State of Pakistan. You may belong to any religion or caste or creed – that has nothing to do with the business of the State.”

His preceding words however hinted at caution, opening his speech with the reminder that “the first duty of a government is to maintain law and order, so that the life, property and religious beliefs of its subjects are fully protected by the State.” It was clear that Jinnah feared inter-religious strife would prove fatal to any true democratic cause, not least of building a new nation state. His fears were not ill founded. A mere six years after gaining independence, widespread violent riots broke out in February 1953 in Lahore against the Ahmadis led by Majlis-e-Ahrar-ul-Islam (Ahrar), a pre-partition religious Muslim political party. The civilian government could not contain the riots, which involved looting, arson and the murder of at least 200 Ahmadis, and the Pakistan army in its first foray into politics eventually quelled the violence by imposing three months of martial law.

The riots saw my grandmother’s uncle and brother being imprisoned for nearly two months, being released finally after the lifting of martial law in May 1953. The Ahrar had demanded, inter alia, the removal of Ahmadis from all government posts and declaring them non-Muslims. It was to set the stage for decades of persecution against the community, climaxing with a fresh wave of anti-Ahmadi violence in 1974 that saw the Pakistan Constitution being amended to cast Ahmadis out of the fold of Islam. Moreover, under the parochial regime of General Zia-ul-Haq, Ordinance XX was passed, that made any attempt to “pose as a Muslim” by an Ahmadi a criminal offense.

Yet, what sealed the fate for Pakistan’s Ahmadis was the introduction of Article 295-C in the Pakistan Penal Code in 1986 that made the death penalty mandatory for blasphemy. This new blasphemy law as it came to be known, made the Ahmadi belief in the prophethood of Mirza Ghulam Ahmad to be considered blasphemous, inadvertently making a mere profession of their faith punishable by death. Importantly, the blasphemy law does not require that specific intent be proved with respect to the defamatory words, making it a strict liability crime and creating a fertile space for misuse.

Thus, by the time we took up our place in the world as children in Pakistan in the 90s, the persecution of Ahmadi Muslims had long become an integral part of the socio-political fabric. The blasphemy law became increasingly entrenched with rising numbers of complaints coming thereunder. It was a surreal experience to be connected to the stories that got caught within its menacing arms; these were at times friends or friends of friends, people simply going about their daily lives. Imprisoned for virtually a profession of their faith – having uttered an Islamic greeting of peace, expressed a desire to build a mosque or mistakenly left behind Ahmadi pamphlets whilst moving house to find the new occupants enraged at the notion of an Ahmadi proselytising. Dozens have been languishing in prison for more than a decade, an allegation of blasphemy under 295-C being a non-bailable offense. And these are the stories of those who have escaped death – those of Ahmadis being shot, dragged in the streets or killed by other mob violence are too harrowing to recount.

At some point in their life, a crisis of identity unfolds on every young Ahmadi in Pakistan, the not so inconsiderable challenge of rationalising being persecuted by your own people. Each incident kindles new fears and the painful dilemma of living the life of a fugitive in your homeland. From the anti-Ahmadi riots in1974 that forced my grandparents to abandon their home in Lahore and seek refuge in a small town near by having seen the homes of family and friends burnt to the ground; to the kidnapping and murder of my 37-year old uncle in 1999 by the now banned extremist outfit Lashkar-e-Jhangvi; to the horrifying Jhelum incident in 2015 that saw the burning down of my uncle’s factory by an angry mob, which reached their home with them still inside, escaping miraculously before that was burnt and destroyed as well; to the agonisingly surreal experience of confronting dozens of condolences following the May 2010 attack on two Ahmadi mosques in Lahore, sharing a connection with almost every victim and survivor – not least with my 7-year old nephew whose father shielded his eyes so that he couldn’t see the carnage unfolding around him. The enduring lesson in all of these has been one of patience and perseverance in times of adversity and that the best response to violence is that of peace – these are the lessons constantly reiterated by the Community and it is through these that survival becomes meaningful and even possible at times. 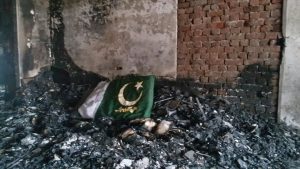 My uncle’s home in Jhelum following its destruction by the mob. A Pakistan flag was placed their by the family as a token of remembrance. [Image courtesy: Humda Ahmad]

For Ahmadis in Pakistan the dreams of a new homeland that came with a promise of freedom and safety have dwindled, in as much have Jinnah’s prodigious words as murky waters of sectarianism have washed away their vibrant energy. While Aasia Bibi walks free, the blasphemy law that besieged her reigns free as well – eating away at the pillars of justice and the moral infrastructure of society. For the hundreds of other victims of this draconian law that continue to languish in prison, hope is not easy to come by – one of the major factors contributing to the international attention Aasia Bibi’s case received was public support the late governor Salman Taseer threw behind her, for which he paid for with his life. It was just another example of how any discourse around amending or repealing the blasphemy law in itself remains sacrilegious in a country long dogged by the mob politics of its religious hardliners.
This entry was posted in Uncategorized. Bookmark the permalink.