For our purposes at this point in the text, we can define an acid as a substance with at least one hydrogen atom that can dissociate to form an anion and an H+ ion (a proton) in aqueous solution, thereby forming an acidic solution. We can define bases as compounds that produce hydroxide ions (OH−) and a cation when dissolved in water, thus forming a basic solution. Solutions that are neither basic nor acidic are neutral. Pure acids and bases and their concentrated aqueous solutions are commonly encountered in the laboratory. They are usually highly corrosive, so they must be handled with care.

The names of acids differentiate between (1) acids in which the H+ ion is attached to an oxygen atom of a polyatomic anion (these are called oxoacids, or occasionally oxyacids) and (2) acids in which the H+ ion is attached to some other element. In the latter case, the name of the acid begins with hydro– and ends in –ic, with the root of the name of the other element or ion in between. Recall that the name of the anion derived from this kind of acid always ends in –ide. Thus hydrogen chloride (HCl) gas dissolves in water to form hydrochloric acid (which contains H+ and Cl− ions), hydrogen cyanide (HCN) gas forms hydrocyanic acid (which contains H+ and CN− ions). Examples of this kind of acid are commonly encountered and very important. For instance, your stomach contains a dilute solution of hydrochloric acid to help digest food. When the mechanisms that prevent the stomach from digesting itself malfunction, the acid destroys the lining of the stomach and an ulcer forms.

If an acid contains one or more H+ ions attached to oxygen, it is a derivative of one of the common oxoanions, such as sulfate (SO42−) or nitrate (NO3−). These acids contain as many H+ ions as are necessary to balance the negative charge on the anion, resulting in a neutral species such as H2SO4 and HNO3.

We will present more comprehensive definitions of bases in later chapters, but virtually every base you encounter in the meantime will be an ionic compound, such as sodium hydroxide (NaOH) and barium hydroxide [Ba(OH)2], that contain the hydroxide ion and a metal cation. These have the general formula M(OH)n. It is important to recognize that alcohols, with the general formula ROH, are covalent compounds, not ionic compounds; consequently, they do not dissociate in water to form a basic solution (containing OH− ions). When a base reacts with any of the acids we have discussed, it accepts a proton (H+). For example, the hydroxide ion (OH−) accepts a proton to form H2O. Thus bases are also referred to as proton acceptors. 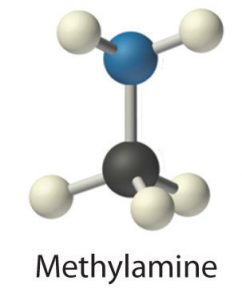 Concentrated aqueous solutions of ammonia (NH3) contain significant amounts of the hydroxide ion, even though the dissolved substance is not primarily ammonium hydroxide (NH4OH) as is often stated on the label. Thus aqueous ammonia solution is also a common base. Replacing a hydrogen atom of NH3 with an alkyl group results in an amine (RNH2), which is also a base. Amines have pungent odors—for example, methylamine (CH3NH2) is one of the compounds responsible for the foul odor associated with spoiled fish. The physiological importance of amines is suggested in the word vitamin, which is derived from the phrase vital amines. The word was coined to describe dietary substances that were effective at preventing scurvy, rickets, and other diseases because these substances were assumed to be amines. Subsequently, some vitamins have indeed been confirmed to be amines.