The Public Figure Exception(s): Finding Fair Use in the Vastness of Early American IP

Originally published on Uncommon Sense, a publication of the Omohundro Institute. This post accompanies “Copyright and Fair Use in Early America,” episode 227 of Ben Franklin’s World. You can find supplementary materials for the episode on the OI Reader app, available through iTunes or Google Play.

Whether you are Gigi Hadid or Jedidiah Morse, your copyright is often more than just a proprietary claim. Public figures have long been bound together in the public eye with perception and re-use of their works, whether people share photographs of you walking down the street or a map produced more than two hundred years before GPS. In an era of Twitter, paparazzi, and a rapidly turning over news cycle, deciding what information the public needs to make informed decisions is an increasingly fraught challenge—but not a new one. As early national writers sought to shape American media in the wake of independence, they confronted what it meant to be a public figure and what value that role had in the creation of new forms of expression.

A legal doctrine highlighted this week through collaboration among libraries, institutions of higher education, and professional research organizations, fair use emerged as a formalized legal framework in the nineteenth century with infamous competing biographies of George Washington and the 1841 case of Folsom v. Marsh, as Kyle K. Courtney and Liz Covart discuss in the #FairUseWeek episode of Ben Franklin’s World. The concept is intended to protect the right to circulate information that would otherwise be covered by copyright.

Fair use doctrine intersects with similar principles around the globe, but several of its particular qualities were formulated in the United States and have roots that date to the beginning of the nation’s history. One root involves a proposed aspect of fair use called the “public figure exception.” As described in the 1985 case of Harper & Row v. The Nation, the public figure exception limits an author’s or proprietor’s right to be paid for their expression when the work contains “matters of high public concern.”[i] A work “containing matters of high public concern” can often be intertwined with the public role of the author. As a consequence, the public figure exception introduces the reputation or image of the author as a consideration in the balance between the individual claims of artists and innovators over their creative labor and the broad social need for the learning and engagement that comes from expression.

Turning to early America can provide a deeper understanding of why. When the phrase “public figure exception” appears today, it is frequently in the context of defamation. In my first book project, I look closely at the relationship between libel and copyright, and how they function in the construction authorial, as well as state, authority. To write and publish a criticism of a public figure was still considered seditious libel in the late eighteenth century. The logic that something could not be libelous if it wasn’t true was not formalized in United States law until 1805, and even then, was determined by state, and not federal, law.[ii] The truth defense evolved over the next century and a half, but in the early national period, the standing of a writer – through their racial, religious, ethnic or gender identity, political affiliation, wealth, education, networks, regional ties – determined the authenticity of their expression alongside any innovative qualities.

It is more Jedidiah Morse than Gigi Hadid then who ties together these complex threads of copyright, fair use, libel, and public opinion. Although media in the late eighteenth century was indeed very social, the media were quite different. Morse might not have been the most adept at the eighteenth-century equivalents of Twitter, like pamphlets and broadsides, but he was extremely skilled at social networking. For the “father of American geography,” Morse shrewdly marketed his nationalistic series of geography books, from 1784’s Geography Made Easy to the 1789 The American Geography to The American Universal Geography, which appeared in several editions in the 1790s and early 1800s. As a strong supporter of the Federalist coalition who consistently cultivated an image of expertise in topography, environmental science, history, and political commentary, Morse was extremely close with other leading figures in the knowledge industry like Noah Webster and employed Alexander Hamilton and James Kent as his copyright lawyers in what would be the first known federal copyright case, Morse v. Reid, in 1798.

Despite, or perhaps because he was such a staunch advocate for copyright, Morse relied heavily on what we would now consider fair use. Writing that he often “aimed at utility rather than originality, and of course, when he has met with publications suited to his purpose, has made free use of them,” Morse added, without irony, that he “frequently used the words as well as the ideas of [other] writers” without telling the reader.[iii] Morse did not see any issue with compiling the work of other writers and using it in his own. Morse conducted his own research and wrote much of The American Geography on his own, but to bolster his credibility, “maintained extensive correspondence with men of Science,” and “in every instance, has endeavored to derive his information from the most authentic sources.”[iv] In other words, he relied on the expertise of others, and in turn, shared their findings while expanding his own. So if one of these experts in turn relied upon Morse’s work for their own, it does not appear that he had much of a problem with it.

Where Morse did have a problem, however, was when someone whom Morse did not deem a valid authority did so. Even worse, when the “pirate” in question was a Baptist minister held in Newgate Prison for sermons in favor of the French Revolution, the Congregationalist, pro-British Morse was aghast. William Winterbotham was in reputation everything Morse feared. He published An Historical, Geographical, Commercial and Philosophical View of the United States of America and of the European Settlements in the West Indies in London in 1795; it was reprinted in New York in 1796. 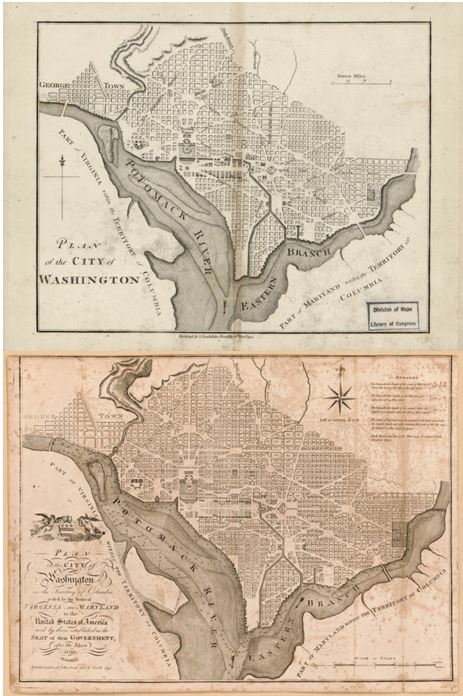 Only then did Morse have any legal recourse, as international copyright did not exist. Alerted to Winterbotham’s book by Morse’s London publisher, John Stockdale, Morse immediately recruited Hamilton as his attorney, writing that “After going over the Work with care & a great deal of labour, I have estimated that nearly a third part of the whole of Winterbothams work, has been copied verbatim from my work, or about 600 pages out of about 2000.”[v] By current fair use standards, this was a high percentage, but what seemed to truly incense Morse was not the quantity, but rather how Winterbotham had “artfully, in many instances … transposed paragraphs & sentences, apparently with a view to deceive the reader.”[vi] It was evident, according to Morse and his legal team, that Winterbotham had copied more of Morse’s work than was appropriate to demonstrate expertise or “authentic sources.” As you can see in the images to the left, while maps were not a source of dispute for Morse, there was clear reliance on The American Geography (top) in the New York edition of An Historical, Geographical, Commercial and Philosophical View of the United States of America and of the European Settlements in the West Indies made by John Reid (bottom).

Winterbotham did not criticize Morse. In fact, when Winterbotham mentioned him at all, it was to praise his status as a geographer and writer. Still, because of Winterbotham’s politics and precarious position, Morse remained worried about his authority as a public figure. This was both a commercial and credit-based fear. If readers began to associate Morse and The American Geography series with the work of Winterbotham, it could encroach on Morse’s market share, but also influence American readers about Morse’s message and his political standing within the Federalist network. Winterbotham’s piracy, whether rational or irrational, reasonable or unreasonable, functioned to Morse like a libel.

Whether the people involved are presidents like George Washington or Gerald Ford, or well-known authors like Morse, the public figure exception is based on an understanding of fair use in which the public need for the expression contained within a writer’s work is pivotal to making informed choices. If the author is an authority in a given subject, especially one that has obvious relevance for pressing issues, financial barriers to that material can have drastic consequences. And yet writers, like all workers, need to make a living. Writing nearly two hundred years before Harper & Row v. The Nation, and fifty years before Folsom v. Marsh, Morse was not articulating clear legal doctrine by any means, but rather musing on exceptions to exceptions. The copyright consciousness in which Morse wrote and published was one in which he could both reap the benefits of fair use and complain of piracy at the same time, in large part because both relied upon his carefully crafted public persona as a geographic expert. When looking at media, authority, and access through the lens of fair use, the early history of copyright is thus as much about public opinion as it is property.

Nora Slonimsky works on the history of copyright and its relationship with media regulation, state formation, and knowledge production in the long eighteenth century. Dr. Slonimsky is the Gardiner Assistant Professor of History at Iona College and Director of the Institute for Thomas Paine Studies (ITPS). This post also appears at the Copyright At Harvard Library blog.

[ii] This was in the case of People v. Croswell (1804), in which Alexander Hamilton argued the truth defense. It was written into law by New York State the following year.

[iii] Jedidiah Morse, The American Geography; Or, A View of the Present Situation of the United States of America Containing – Astronomical Geography, Geographical Definitions, Discovery, and General Descriptions of America and the United States – of their Boundaries, Mountains, Lakes, Bays and Rivers, Natural History, Production, Population, Government, Agriculture, Commerce, Manufactures, and History –a Concise Account of the War, and of the Important Events with have Succeeded with a Particular Description of Kentucky, the Western Territory and Vermont – of their Extent, Civil Divisions, Chief Towns, Climates, Soils, Terrain, Character, Constitutional, Courts of Justice, Colleges, Academies, Religion, Islands, Indian, Literary and Humane Societies, Springs, Curiosities, Histories &c to Which is Added an Abridgement of the Geography of British, Spanish, French and Dutch Dominions in America and the West Indies – of Europe, Asia and Africa Illustrated with Two Sheet Maps – One of the Southern, the Other of the Northern States – From the Latest surveyors. Shepard Kollock: Elizabeth, New Jersey, 1789: vi-vii.