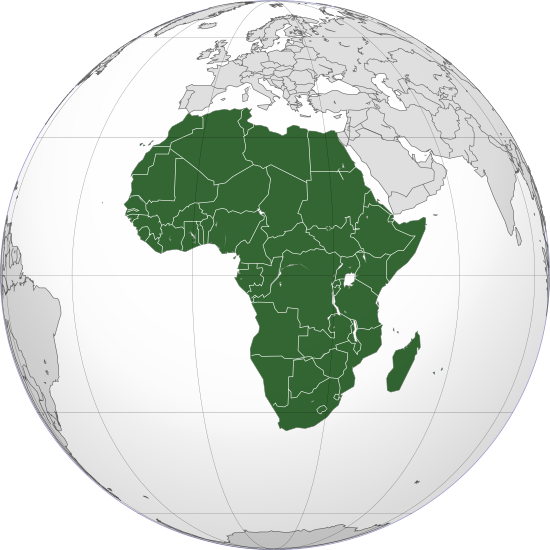 Africa and AI, Now and the Future: A Call for a Continental Renaissance

The following is based on my research at the Berkman Klein Center for Internet and Society at Harvard University this summer in the the Youth and Media team. Thanks to the YaM/AI team for the support.

Much has been said and written about the potential impacts of artificial intelligence in revolutionizing every sector of life as we know it. The purpose of this piece is to look at these developments through a regional lens, focusing on Africa.

How Do We Think about AI?

In more practical terms, I see the manifestation of artificial intelligence tools, for example, in the maps that provide directions and predict the duration of my trip when traveling from Abeokuta to some parts of Ilorin in Nigeria; the news suggested for me to read based on my previous online searches; and the array of advertisements I see whenever I use my phone online. Most of the time, the prices I find whenever I want to try making purchases on e-commerce platforms are decided by some algorithm, based on my previous searches and several other factors. When in Lagos, I and other commuters use a bot to get directions and prices for public buses – something other advanced maps lack. Soon enough, we will have access to autonomous vehicles. From the rise of on-demand transportation (Chutel, 2016), the increase in wearable technologies (ITWebAfrica, 2017) and telemedicine in the health sector, we see the current and potential impact of artificial intelligence in Africa.

Why Should We Care?

We might begin by thinking about how artificial intelligence might impact our society more broadly. Public understanding of the influence of AI is challenging to estimate, not only in Africa but other parts of the world, as the research, development, and deployment of intelligent systems are nascent, fractured, and poorly understood by those outside of specific technical fields and corporate efforts (Elish, 2016). As AI is being introduced into various industries, from healthcare to transportation to education, we should reflect on potential risks caused by unconscious biases and errors restricted to the ‘black-boxes’ of proprietary systems. Currently, there are no socially accepted ethical standards for creating artificial intelligence systems. There have been several reports of racial and gender biases exhibited by AI programs and tools (Devlin, 2017); with the ease of deployment, I only wonder what effect these biases may have on the African population, in terms of brewing external bias and discrimination.

In preparation for the future, Africa needs to keep an eye on the development of artificial intelligence, its impact, the likely challenges it will bring and, more importantly, the ethics and governance principles that guide its domestic use.

For readers unfamiliar with the italicized heading above, Sidon-look is a state of a seemingly nonchalant attitude and the embrace of the ‘let-the-sleeping-dog-lie’ syndrome. It also describes the act of staying away or having a passive response to discussions or issues. ‘Sidon-look don do,’ referencing the Nigerian unofficial pidgin language, is another way of saying “enough!” to the passive response of the African community in terms of advances in the recent industrial revolution. This is a call for all stakeholders to rise to the challenge and contribute to the discussion around the ethical governance of artificial intelligence systems to help advance society as a whole in the context of our rapidly evolving technological landscape.

There needs to be an effective collaboration between governments, policy makers, the private sector, research institutes, entrepreneurs, futurists and civil society groups to research, study, understand and produce materials that serve as guidelines for navigating the future of artificial intelligence and maximising the potential of emerging technologies in Africa. Civil society groups need to understand the effect of these technologies on their work and build tools to educate the public about these systems. Members of the fourth estate have an unbiased responsibility to be just in educating the public about the effects of artificial intelligence.

What this means for Africa’s Young People

An understanding of what the concept of artificial intelligence and other emerging technologies mean to the teeming African youth population represents a key step in preparing for the future, promoting digital citizenship in a knowledge-based economy, and facilitating home-grown innovation. Young people in Africa should go beyond simply consuming AI-based service to becoming co-creators.

To promote engagement of the young generation in AI, it is useful to consider the current and future educational landscape of the continent. Indirectly, this framing will help the continent ask herself tough questions, such as, What are jobs of the future like, and what types of skills are required? How can we best prepare youth for long-term success given these occupational, and, subsequently, educational, shifts? The challenge will not be finding quick answers to these questions; the challenge will be sincerely asking the right questions devoid of political or cultural sentiments.

One noteworthy trend within the artificial intelligence industry in Africa has been the rapid growth of AI-based start-ups. These services range from a chatbot that allows users to make financial transactions easily, a tool used in detecting diseases and improving agriculture in Uganda, a platform for quick and cost-effective diagnosis of birth asphyxia from infant cry, and several business-owned chatbots.

Some countries in Africa are promoting start-up development by establishing and strengthening innovation hubs, often led by the government, the private sector, and academic institutions. According to this report, there were over 300 technology innovation hubs across Africa as of March 2017 (Ventureburn, 2017). Beyond being spaces for experimentation, innovation hubs and makerspaces in Africa should prioritize investment in research and development, and build partnerships that promote AI-based growth.

While I delight in the rise of AI to solve meaningful problems for a lot of people, especially those at the bottom of the pyramid, I tend to imagine what possibilities can exist with AI beyond the grip of the current tech giants within startup communities. Can we truly have open-source tools that innovators and academics can leverage for research and development?

With the development of AI, it is important to think about ethics that can be imbued in intelligent assistants, to reflect and promote the positive values we embrace as a society. There needs to be a system that rewards ethical excellence in the design, deployment, and use of AI. More than before, there is a need for a set of ethical principles that guide the process of building AI systems.

For the past several months, I have been studying the artificial intelligence landscape in Africa. I have observed a very clear divide between Africa and other parts of the world in the context of AI. We seem to have the ‘Global North’ as the AI-have and the ‘Global South,’ especially Africa and Latin America, as the AI-have-not. While I acknowledge the presence of artificial intelligence research groups within the continent, they seem to be challenged by the seemingly low visibility of their work. This makes it easy to think that either there aren’t relevant ongoing practical research projects in fields related to artificial intelligence and its impact on society, or we have a cycle of research made solely for publication and adjoining promotion within the academic ecosystem, without any relevance to societal needs, which may widen the disconnect between the gown and town.

This also serves as an open call to identify and make visible initiatives by stakeholders, within and outside academia, that demonstrate recent development in the field within Africa. I encourage these initiatives to involve young people, from any of the over 50 countries in the second largest continent of the world.

Apart from the United States and Canada contributing to the global conversation around  artificial intelligence and other emerging technologies, China has also become a key player in the field of AI. Experts have ascribed this to the large market in China and the vast base of AI-knowledgeable individuals. For instance, 43% of the contributors to AI publications are from China, producing extensive amounts of information that promote the data-driven AI economy. In October 2016, the United States Government released a plan aiming to help prepare society for the future of artificial intelligence. In a related development, China recently unveiled a ‘new generation of artificial intelligence development plan’ strategically showing commitment to shaping the influence of AI till 2030.

Africa cannot afford to ‘play catch-up’; more than ever, there need to be conscientious efforts to understand and shape conversations around the development of artificial intelligence, affirming the ‘Africa-rising’ trajectory and spurring innovation and economic growth. These decisions and adjoining actions from Africa around the evolution of technology will have an enormous impact on educating the next generation of leaders in the continent, redefining economic development and citizen well-being. Given that Africa has an estimated population of 1.248 billion people, with a median age of 19.5 years, with the right decisions and infrastructure, leveraging technological advancement, a brighter future can be secured for the future of the continent.

It starts with getting involved, one positive action at a time.

Embracing Intersection – Being Comfortable with the Unconnected

I have always caressed the subject of innovation and strategy. One thing that is obvious is that most times, some of the best ideas come from the unconnected. Over the last four years, I have seen myself brainstorm on and advice on several ideas – some are on areas I don’t have core expertise on but I had strong vibe to learn and grow. These areas are what Frans Johansson calls the intersection in his book ‘The Medici Effect’.

The Intersection is the unknown territory where we cannot easily apply past knowledge and experience. Some of the most successful innovations come from the place of interception.

For me, the intersection is uncomfortably soothing – and I love the challenge, knowledge and comfort it brings. I remember a discussion with my Dad earlier this year, where I confided in him that sometimes, deep down in my heart, I really don’t know how to recommend the paths I tread to others. Not because I don’t want others to learn, but because those paths don’t seem conventional and connected.

People stay in a field – even when they are convinced they shouldn’t – because of the time spent in the field. Lots of emerging professionals continue with what they do unhappily because they have spent years studying a thing, even when their hearts aren’t there. I have seen people whose ONLY reason for proceeding with further studies (Masters/PhD for instance) in a field is that they studied that subject in their first degree (even when they don’t like it). I have seen businesses stick to what they used to do that didn’t work because they thought that is their niche. The decision to invest more time (and resources) in anything should be based on what’s going to happen in future.

I agree that consistency is very important; it makes sense to be a expert in an area. What if we can throw that ‘long-standing caution’ in the wind, and embrace innovation and ideas outside of our current domain of expertise? We must never allow what we have done in the past become a criterion for what we can do in the future.

What drives me in most things I do is how I can understand how these unconnected sectors work and how we may influence the future of education and governance through technology and values-based leadership. This seems audacious and will require me to be comfortable staying at intersections – even if they don’t seem to pay off at the moment.

Embracing intersection requires that we acknowledge our fears and embrace risks – it is not as easy as writing this, but it is worth it. It means embracing the risk of forming new relationships in the new field, learning at an exponmential rate and I agree that the intersection unleashes great creative powers through the explosion of concept combinations; for those thinking about ground-breaking innovation, this can represent a gold mine of ideas.