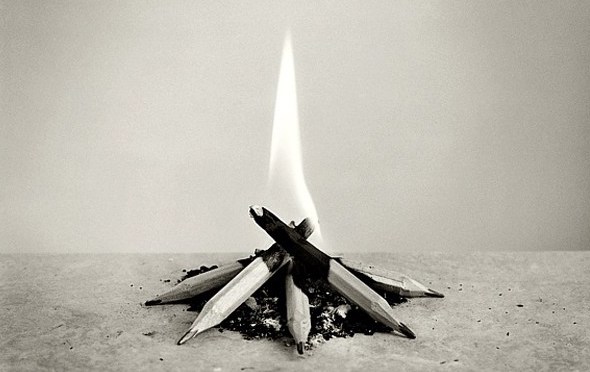 In “Death in Venice” by Thomas Mann, Aschenbach’s love for Tadzio symbolizes his personal need for fulfillment, by conveying his own narcissism, his unresolved childhood, his artistic aspirations, and his moral conflicts, through the adoration of Tadzio’s entity. The writer chose this juvenile boy as the love object of his famous and accomplished protagonist, to encompass and express all the complementing qualities and internal resolutions that were central to his existence at that point in his life.

Beyond mere sexual desire, Tadzio becomes the figure of platonic love that ascends Aschenbach’s craving of his personal ideal to dangerous heights, until it ultimately descends him to his own death. By presenting Tadzio as the equivalent Narcissus of his reverse reflection; contrasting his prudent childhood to Tadzio’s carefree spirit; acknowledging his artistic aspirations for the ultimate inspiration; outlining the moral restrains that predominate his character; Mann weaves the threads that make up the fabric of Aschenbach’s fatal love affliction with a pubescent boy in Venice.

While writing his revered novella, Thomas Mann kept working notes that provide valuable clues of hidden meaning that infer the formation of his story. Supplemented with his private correspondence and essay extracts, following the publication of “Death in Venice”, these chronicles add to the understanding of the work and bring about new meaning by resorting reliably on Mann’s own comments.

It is credible to perceive Aschenbach, to a great extent, as a self-portrait of Thomas Mann, and therefore read the narrator and the protagonist as the same person. There are many reasons that provide evidence in support of this argument. Mann had himself travelled to Venice a year before he wrote the book and stayed at the same hotel at Lido. His wife, Katia, which was with him during this vacation, recalls that indeed Mann was fixated on a particular boy from a Polish family during their stay at Hotel des Bains. Mann even went as far as to investigate with accuracy the origin of Tadzio’s name by corresponding a Polish acquaintance to gather reliable information (Koelb 70), something that his protagonist also did. His portrayal of Aschenbach as a successful writer illustrate Mann and his work, to the point that he credits Aschenbach for receiving outmost success by citing Mann’s unpublished works. Finally his inspiration to copy the theme of Goethe’s work, further supports this claim since it was also autobiographical in nature. Through this angle, it is fitting and essential to assume that the author uses the narrator and the protagonist, to retell his story and express his narcissistic disposition unrestrained from the modesty and discretion that is expected when one writes explicitly about oneself.

The theme of Narcissus is prominent throughout the novel and is reflected from the author, to the protagonist, to his love object – Tadzio. In this game of idolized reflections, Aschenbach’s love for Tadzio is a symbol of his own narcissism. Upon setting eyes on Tadzio, Aschenbach noted his youth and beauty. To him Tadzio appeared as a noble god with a statuesque perfection of form, surpassing in beauty even art and nature. His descriptions of him are nothing less than the description of a work of art; comparing him to the Greco-Roman statue “Boy Pulling a Thorn From His Foot”- known for its graceful pose (Koelb 22); and describing him as if painting his portrait when he depicts him from a profile view, sitting on his chair, resting his head gently on his clenched hand. Indicating strongly that this theme is central to the overall conception, the very first note that Thomas Mann kept on his notebook was about Tadzio as Narcissus: “Tadzio’s smile is like that of the Narcissus who sees his own reflection – he sees it on the face of the other.”(Koelb 70). Similarly, the author reflected his own image onto his protagonist, who admires his intellect and artistry. Aschenbach openly venerates himself and boasts with intense narcissism, by highlighting his intellectual profile with confidence, and credits his bloodline as the cause of him being a “special artist” (Mann 7). When describing his intellectual force, Mann associates him with Louis XIV, and reflects his own image by bestowing on Aschenbach the same royal honorary title that he was granted. Tadzio is young and beautiful and carefree. He is everything that Aschenbach – in all his ravishing glory of intellectual accomplishment – is not. Yet he admires him as much as he admires himself, because he complements him perfectly, as a reverse reflection of himself.

This reverse and complementing reflection of Tadzio also challenges Achenbach’s unresolved childhood, which stands as another symbol of his love for him. Tadzio, at the age Aschenbach met him, had strikingly different childhood than he did. Achenbach was successful from a very young age. Mostly isolated, as he was an ill child, homeschooled, and had no friends – he was never a child himself. “Since his entire being was bent on fame, he emerged early on as, surprisingly mature, and ready to go before the public. He was practically still in high school when he made a name for himself.” (7). As a dignified and conscientious young man, he did not have a carefree youth similar to Tadzio’s. Although he was an assiduous over-achiever from very young, that was not his true nature, “possessing anything but a naturally robust constitution, he was not so much born for constant exertion as he was called to it.” (8). Observing Tadzio, surrounded by his peers, enjoying a carefree vacation, he was able to rest his eyes, and his soul, on that boy. This effect of soothing resolution is apparent when, although he yearns to see him again, he realizes that the boy had missed breakfast, because apparently he overslept; Aschenbach is taken over by a warm feeling of content, approving of Tadzio’s permitted slumber. “Well, little Phaeacian, he thought. It seems you, and not they, have the privilege of sleeping your heart’s content.” (24). Quite in contrast to his own strict morning regime, he smiles and enjoys the boy’s defiant absence, as if he himself had skipped a morning chore. As a result, by admiring and falling in love with this alternative childhood of Tadzio, his own unresolved childhood was being nourished and fulfilled.

Above all, Aschenbach was a devoted artist. The love that Tadzio stirred in him was also a symbol of his craving for artistic insight. Before deciding to visit Venice, Achenbach was troubled by a stale sensation that impeded his creativity. “Was his enslaved sensitivity now avenging itself by leaving him, refusing to advance his project and give wings to his art, taking with it all his joy, all his delight in form and expression?” (6). He suffered from a writer’s block and sought ways to escape his tormenting dreary and familiar life. He felt his work lacked fire, playfulness, and joy. The sight of the Traveller, and his intense stare was sufficient to ignite his first upheaval: “It was the urge to escape that was behind this yearning for the far away and the new, this desire for release, freedom, and forgetfulness. It was the urge to get away from his work, from the daily scene of an inflexible, cold, and passionate service.” (6). Aschenbach was in desperate need of inspiration, as his highest artistic goals had not yet been materialized. “Now that his life was slowly waning, now that his artist’s fear of never getting finished – his concern that the sands might run out of the glass before he had done his outmost and given his all” (5). He still wanted to write his greatest work before he died. Alert to the prospect of divine inspiration, Tadzio became his object of glorious admiration that ignited in the artist the promise of creation. By embracing the danger and adventure of fantasizing and stalking a young boy, his love symbolizes his thirst for artistic mastery and his desperation for “motus animi continuus”.

The moral conflicts that reside in Aschenbach are challenged and expressed through the symbol of his love for Tadzio. Homosexuality, although muffled, is repeatedly introduced as a lurking passion that is eventually punished by death. Mann in his essay “On Myself” outlined this point clearly: “My theme was the devastating invasion of passion, the destruction of the structured, apparently conclusively mastered life, which is degraded by the “foreign god,” by Eros-Dionysus, and thrust into the absurd.” (Koelb 110). His intention is to relieve his torment, not to overcome it, or embrace it. As a repressed homosexual, he is negotiating his passion, shifting the cardinal to the intellectual, to justify what he cannot accommodate as dignified and graceful. Mann’s hand-note distills this concept perfectly in one sentence: “Love of beauty leads to morality, to a renunciation of sympathy with the abyss” (Koelb 72). Aschenbach resists vulnerability with fierce. He seeks to justify and purify his passion. To his rescue, he summons ancient Greek philosophy, by quoting Plato’s “Phaedrus”, and takes refuge in Socrates words: “The lover was more divine than the beloved because god was in the former and not in the latter” (38). His journey from passion to degradation is traced by him, by repeating twice his quote of Socrates: “For beauty, my dear Phaedrus, beauty alone is both worthy of love and visible at the same time; beauty, mark me well, is the only form of spirit that our senses can both grasp and endure.” (38, 60). Tadzio’s beauty exulted him, but also uncovered his shame, and made him for once, vulnerable to his passion.

Although initially Mann disclosed in one of his letters that the story sought to imitate Goethe’s novel ‘Elective Affinities’ (Koelb 96), as he had clearly stated: “Originally I had not planned anything less than telling the story of Goethe’s last love, the love of the seventy-year-old for that little girl, whom he still absolutely wanted to marry…” (Koelb 94). This obvious theme of lust for a young juvenile eventually became only a backdrop, upon which, a deep-seated composition of internal conflicts and resolutions was developed. Mann himself befell in struggle with his intricate story: “I am tormented by a work, which, in the process of its execution, has evermore proved itself to be an impossible conception…” (Koelb 93). His effort clearly implies that there is hidden meaning beyond the apparent homosexual love of an older man for a teenage boy. Describing his work, Mann elaborated on the objective of his theme in one of his letters: “…but rather represents (Death in Venice) a dense network of intentions and relationships that possesses something organic and, therefore, thoroughly ambiguous.” (Koelb 95). These ambiguous layers of meaning are linked to Mann personally through his protagonist during the writing process: “What also came up at that time was a personal, lyric travel experience that made me determined to carry things to the pinnacle by introducing the motif of ‘forbidden’ love…” (Koelb 97).

This forbidden love that was reflected from Mann’s real life, to Aschenbach’s fictional character, carried the symbolism of personal fulfillment, the strain of moral attainment, and the cost of such quest. Mann seeks to evoke sympathy as he unravels the weaknesses of his eminent character. His suffering and consequent adversity are not resolved but only examined, before he is ultimately punished by fatal eradication. Aschenbach is sentenced from the very beginning to becoming a martyr, and an artistic icon, in the footsteps of St. Sebastian. Succumb by his passion, Aschenbach is stripped entirely of his dignity and grace. Morbidly, in one of his letters, Mann concludes: “It does not have a positive ending; the dignity of the “hero and poet” is completely destroyed. It is a real tragedy…” (Koelb 93).