And Earth is a bigger target

A comet is headed for Mars.

Now approaching at 125,000 miles per hour, it will explode with the force of 35 million megatons of TNT if it hits. That’s a third the size of the collision that caused the Cretaceous-Paleogene extinction event, which famously erased the dinosaurs and ended the Mesozoic, around 66 Million B.C. It also left a 110-mile wide crater next to what is now Mexico. This Mars impact, should it occur, will also be larger than many other impact events that changed life on Earth utterly, causing mass extinctions countless times in in ages before ours.

The chance that this comet will hit Mars is one in two thousand. The chance that its tail will graze Mars and produce an impressive sky show there are high. Earth-made probes on the surface of Mars will be watching, if they survive. So expect some impressive news, either way.

By the way, my favorite comet of all time was Comet West, which glided slowly through our skies through several weeks in the Winter of 1976. It was beautiful. So was Hale-Bopp, in 1997. Here is an excerpt from what I wrote at the time:

The most promoted comet in recent history was Kahoutek, in 1971. Kahoutek was supposed to be the biggest comet since Halley last appeared in 1910. But after all the hype, Kahoutek was nearly invisible. I can’t even say I saw it. At least I can say I looked and that maybe I sawsomething. (But hey, I lived in Jersey at the time. Whaddaya ‘spect?) 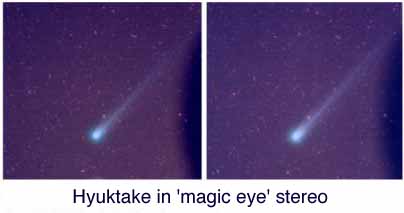 Bonus links: Comet Ison, which might become “the comet of the century” later this year. After looping close to the Sun, it may become as bright as the moon, and visible in daylight. And Comet Panstarrs, which is visible now.