Bad Dog (trite but so right)

Posted on November 2, 2007 by dowbrigade 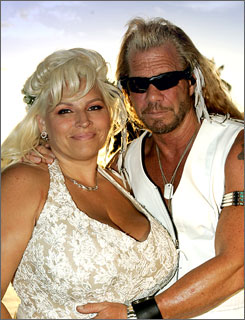 Dog Chapman has been captured spewing foul-mouthed racist slurs on a tape obtained exclusively by The NATIONAL ENQUIRER.

And now a civil rights leader is calling for Dog’s TV show to be removed from the airwaves.

In a shocking world exclusive The ENQUIRER has obtained tapes of two revolting phone conversations in which Duane “Dog” Chapman unleashes a filthy bigoted attack, littered with the N-word and other disgusting racial insults.

The star of the A&E reality show Dog, The Bounty Hunter directed his racist hatred at his son Tucker’s girlfriend Monique Shinnery, who is black.

from the National Enquirer

Looks like the Dog really shat the bed this time. Listening to the tape, the eerie thing is that the street-smart Dog had a prescient notion of the set-up which was about to snap its steely jaws on his overgrown testicles.

The language used by the Dog makes Don Imus’ sound like a Sunday school sermon. The kind of red-neck racism and egocentric spite revealed by the boisterous bounty hunter is impossible to defend. Ah, don’t we love a challenge.

If the Dowbrigade were the Dog’s spindoctor, we would get the grizzled gladiator in front of the cameras as soon as possible, to deliver the following statement.

“You all know me from my TV show as a crime-fighter and family man, and that is what I am. Recently, a tape was illegally recorded and released which reflects me in a very bad light. My wife and I very much regret that this has occured, and sincerely appologize to anyone who was offended by my words.

To all of those who were shocked by my language, please remember the context. This was a private family phone call between myself and my son, who I was quite angry with. I was trying to warn him about his girlfriend, who I felt was conspiring against the Chapman family with the National Enquirer, trying to destroy everything we have worked so hard to accomplish. What has happened in the past few days shows that those feeling were not unfounded. I know that someday she will try to destroy my son like she has his father, but right now he doesn’t want to hear the harsh truth.

As to the language I used, that is the language I was taught as a child, and it is the language of the streets where I do my work, keeping scumbags off the street and protecting all of the decent families of America. Over the years I have learned to control my tongue, and I never use words like that around women or children, or even in public. But when I am trying to make a strong impression on my son, I use language which will grab his attention. After all, I am a bounty hunter, not a college professor. I never intended that this conversation be made public.

So I apologize for myself, and for him, and I forgive him for betraying me because I know that he is under the influence of a powerful and evil person intent on stopping our mission to clean up the streets of America. I hope we can count on your support to continue with our mission.”

4 Responses to Bad Dog (trite but so right)