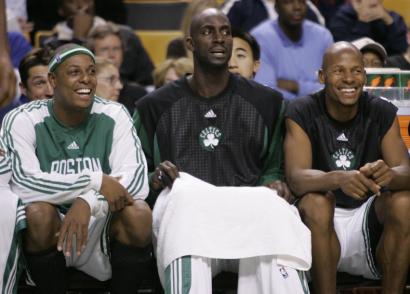 Wednesday night’s summary execution of the Sonics by the Celtics, 111-82, was more of a mercy killing than a duel, and&nbsp; looked at times like a gaggle of Junior High JVs against a team of McDonald’s All-Americans. Pleased as punch with the new-look Celtics, we can’t help reflecting on the unique dynamic of roundball among professional team sports.

Basketball is perhaps the team sport in which a single individual can have the most impact. In no other team sport can the replacement of a handful of players transform a team from pathetic to proficient overnight.&nbsp; At the same time, in no other sport is the sacrifice of individual achievement more essential to the success of the team.

Obviously, part of the reason that replacing a couple of starters can have a bigger effect in basketball than in baseball,&nbsp; football or soccer is that those 2 players represents 40% of a starting lineup in B-ball. However, we see it as even more crucial due to the higher degree of personal interaction between players during the play of the game.

Unlike the wind-swept acreage of a football stadium or a soccer pitch, in the pressure cooker of a basketball court all five players are constantly aware of the location of each of their teammates and opponents, and are in constant voice communication, calling out plays, warnings, razzings, encouragement, heads-ups, timing cues and defensive schemes and switches. Unencumbered by helmets or face masks they are able to keep up a constant interplay of verbal messages to accompany the improvisational physical ballet being created on the court.

We are certainly not the first to note the similarities between a sweetly syncopated starting five and a quality jazz quintet; both work from set progressions and then improvise off of them. Hoops is the skat of sports, the bebop of ball games. Changing a couple of the players can completely alter the style and effect of the music produced.

In the case of the Celtics, three of this year’s starting five, Paul Pierce, Kendrick Perkins and Rajon Rondo, were here last year, playing basically the same roles. The missing starters, Al Jefferson and Delonte West, have been replaced by Ray Allen and Kevin Garnett. On paper, at least, the Celts have only gained 5 points a game from the switch (Allen 18 + Garnett 18 vs. Jefferson 21 + West 10), and as a counterbalance Paul Pierce is averaging 5 points less per game this year than last! Yet last year they won 29% of their games, and this year, 81%.

This turnaround can’t help but give hope to hapless franchises like Memphis (23%), Minnesota (22%) and Miami (17%). Hang in there, guys – you’re just a trade or two from the Finals!

At the same time, and for the some of the same reasons, the chemistry and integrated intensity of the five players on the court (as well as the bench) can turn a sow’s ear into a silk purse faster in B-ball than in any other sport. By sacrificing individual stats and achievements to mutual goals even a total NBA toad like last year’s Celtics can be transformed into a prince in short order.

The numbers are hard to argue with; see Paul Pierce, above. Or how about the Big Ticket himself; last year Garnett averaged three more points and three more rebounds for a Minnesota team that finished 18 games below .500. Ray Allen is currently dropping in 8 points less than his prodigious production on a woebegone Seattle team a year ago.

Each of these superstars has given up a spot standing atop the scorer’s list for a communal seat at the top of the team standings and a guaranteed ticket for a ride deep into the NBA playoffs. And you can tell, from their comments, demeanor and production, that they are as happy as clams with the trade off. To borrow a baseball idiom, they are paying more attention to the name on the front of the uniform than the name on the back, and it’s paying off.

At long last, after twenty years of off-tune tweeting and sour squawking, beautiful music is pouring out of the Garden once again. Hallelujah!