The Dowbrigade uses an icebreaking exercise with groups of recently arrived students in which one of the categories for discussion is “One thing you really want to do before you leave Boston”. When our turn came we always list visiting the Harbor Islands, something we have yet to do 37 years after we first came to live in the Boston area. This may be our chance. 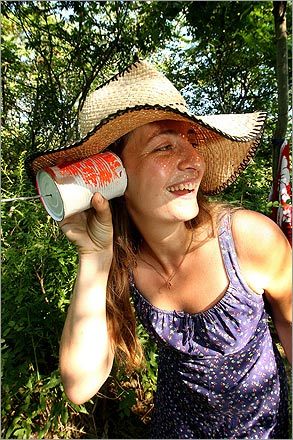 Take the ferry to Bumpkin Island this weekend, and you may come across a woman lurking in the underbrush, wearing burlap covered with leaves. Don’t be alarmed: She’s not a kook. She’s an artist.

So are the men in kimonos staging lectures and the folks who may invite you to chat with them via tin-can telephone.

About 40 artists have spread out across the Boston Harbor Island for Labor Day weekend as part of a special event called the Bumpkin Island Art Encampment, featuring 10 art installations, sculptures, and performances.

It’s free and open to the public today through Monday; ferries are available to the island from various locations.

Some of the artists are exploring the idea of home. With “Survival Kit,” Gabe Moylan and Rachel Roberts are trying to create a space of domestic tranquility using only a Federal Emergency Management Association survival kit and what is available on the island.

Other pieces have been sparked by 19th century history. “Astrodime Transit Authority,” the tin-can project, commemorates the 150th anniversary of the first official use of the trans-Atlantic cable – an 1858 telegram to President James Buchanan from Britain’s Queen Victoria.

At low tide, when it’s possible to wade to the mainland, a group plans to set up a tin-can call from Bumpkin Island to nearby Hull. They will invite visitors to join in a reenactment, playing an extended game of telephone.