The Boot Knows No Bounds

Posted on September 3, 2010 by dowbrigade 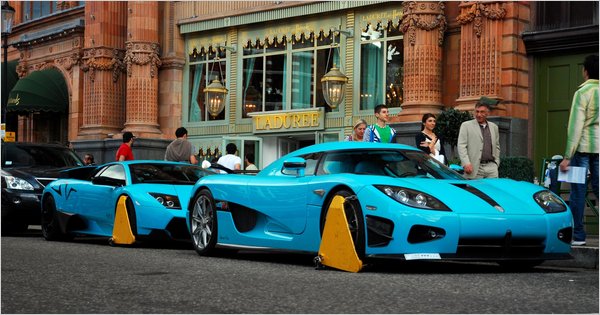 LONDON — With his canary yellow Ferrari at rest in the forecourt of one of the most expensive hotels in London’s upscale West End, its eight-cylinder, race-bred engine burbling, a young Arab man who gave his name as Khalefa spoke with whimsical regret about the array of even faster, more expensive super cars parked nearby that belonged to other young men like himself from the Persian Gulf oil states.

The Dowbrigade is by no means a car fanatic, but we are Male, and American, so yes, we have the Car Gene.  When we saw a version of this article in the London Evening Standard back in July, we decided to check it out. The rumors were undeniably, spectacularly true – parked illegally on the street, outside a couple of exclusive coffee and pastry shops built into the back of Harrods Department Store in Knightsbridge, were a collection of automobiles, some of which we had never heard of and some we had, but never imagined seeing face to face.

The results of that little expedition can be seen in the Picasa album linked below.

On our honor, all of the cars shot therein were spotted in a single afternoon walk around Herrods Department Store on the evening of July 22.  The story is that this summer the kids and cousins of the Omani royal family, which just bought the store from Dodi al Fayed, who never got a chance to be princess Di’s father-in-law.  They had their hot car collection transported en masse to London for the summer, and we’re sure they were SHOCKED when they came out of the cafe after sucking on a hooka for an hour or so, that their rides were not only ticketed, but had GOTTEN THE BOOT!

This summer we found London awash in robed women.  Most of the Arab men wear European clothing, only a very few go around in the long white nightgown, but the head-to-toe Burka babes are all over.  They are desperately trying to save the Western economies by buying as much of our shit as possible, but its getting harder all the time.  They were keeping ahead of the curve until the price of oil tripled in the past few years, and so now they have been forced to re-triple their efforts to spend enough to keep us afloat.

According to the article, the rich Arabs are all in London because they “Don’t feel comfortable” in New York after 9/11.  Go figure.

2 Responses to The Boot Knows No Bounds