Gender and Advising in Undergraduate Research: Evidence from the Harvard Hoopes Prize

Do women win the Hoopes Prize, an undergraduate award for thesis-writing at Harvard College, more often than men? Does the gender makeup of the advising team affect the probability that their student will go on to win the Hoopes?

I break down the timeline between enrollment at the college and Hoopes acquisition into three stages: Pathway, Connection, and Evaluation.

Figure 1 shows all of the different pairs between advising teams and students by gender. A further subdivision by concentration is included in the full thesis; the volume of each pair varies widely by department. However, this graph should demonstrate at a general level that there exists some assortative matching.

After establishing that this pattern of seeking same-gender advisors exist within specific concentrations, I used statistics to randomly assign advisors to students. I then compared this “predicted distribution” to the actual rates of student/advisor matching and I find that students search for same-gender advisors, and women are more likely to seek out female advisors in male-dominated concentrations. 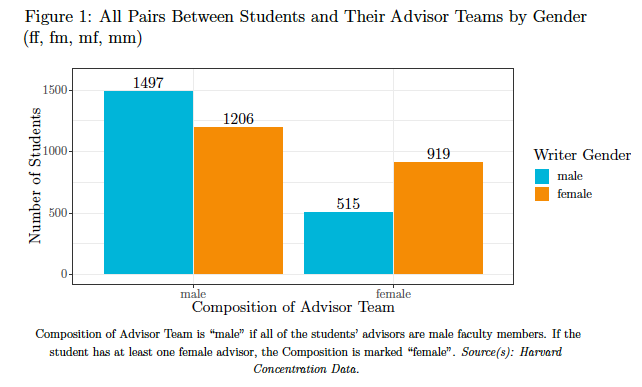 Figure 2 shows the proportion of Hoopes Winners in every concentration by gender. I use OLS to investigate how the probability of winning a Hoopes Prize differs by student and advisor gender. First, in most concentrations, there is some baseline probability that women with at least one female advisor will win the prize. The mathematical evidence is mixed regarding the relative (dis)advantage of being a male student and having an all-male advisor team doesn’t appear to be particularly advantageous for female students. Interestingly, it appears that any advantage male students have is almost entirely quashed if they have an all-male advisor team. This evidence indicates that the most productive pairing is between male students and female advisors.