We successfully completed our speaker!

After a full day in the lab, our speaker is fully constructed: 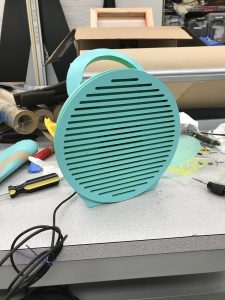 In the final stages of construction we faced many unexpected problems, and had many small tasks that needed to be worked on.

Once Jim explained the completed circuit to us, we got down to the mechanical components and manufacturing. We coated the 3D printed materials and sanded them down until smooth, and then coated them in our chosen shades of paint. We then attached the handle through internal holes and steel rods that we cut to size. This was our first lesson in design and construction: the rods had no way of staying put, and so more foresight into this part of the design was needed.

Once the handle was in, we placed the circuit in place and pulled the top knob through the hole and secured it with a nut. The buttons we printed fit right on top. Next, we filled the extra space of the body with foam.

The next step was to place in the internal panel (the driver mount) with the driver and screw it all into place. Here is where we faced our most difficult challenge. We realized that the way the pieces were designed meant that two parts needed to be screwed securely from behind in order to hold in place, but as we would screw one, the other would be blocked, and vice versa. After struggling with this for a long time, we decided that we would glue nuts onto the back of one of the pieces. Then we would screw in the other, and finally, screw the original one only from the front, but because the nuts were already in place, the structure would stay intact.

With all of that assembled, we attached the 3D printed rectangles to the sides of the faceplate and force-fit the plate onto the body of the speaker. Finally, our speaker was complete! 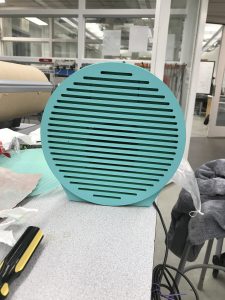 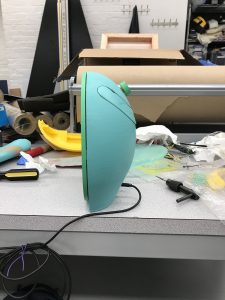 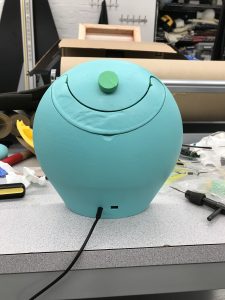 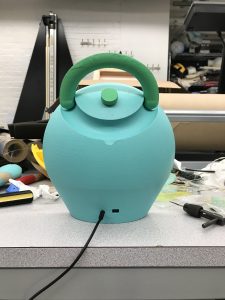 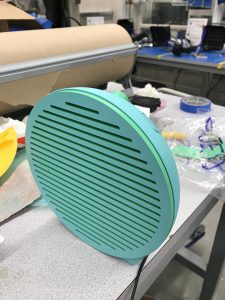 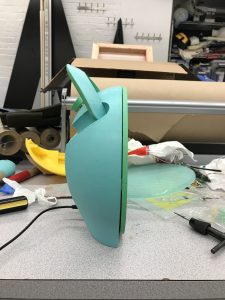 And then we were able to plug in, turn it on, and turn up the volume:

At that point, we could finally try to analyze the sound. After speaking with Jim and Professor Wood, we discovered that much of speaker analysis is subjective. We were advised to play through the speaker and simply talk about what we heard. We decided to play a chirp, as well as a tone at varying frequencies. At first, as we increased the volume, the sound became much more buzzier. We realized that to fix this, we could increase the foam insulation within the speaker, and so we did. The sound became much clearer. We were curious to see what frequencies were audible through our speaker; another specification that could determine the success of our speaker. We played a chirp from about 20 Hz-1000 Hz. It only became audible about halfway through the chirp, or at about a few hundred Hz. This seemed to be pretty good, but of course, a nicer speaker that could push more air through it would be able to be heard at even lower frequencies. Lastly, we noticed that as we varied the frequency of the tone played, that it sounded much quieter as it got lower, even though we did not touch the volume knob. In the end, we realized that this is due to our ears and how we hear sound, and not the configuration of our speaker. In the end, our speaker still did have a slight buzzing sound due to the grill in the front. The long, slender beams of the grill vibrate with the sound waves from the driver and react with the body to create a buzzing sound.

Reflection: This was such an exciting process and we are so excited to now have these amazing looking, fully functioning speakers! If we had had more time, we would have loved to spend more time on the quality of sound analysis. Many things came up last minute in terms of construction, and so we only just recently finished the build part of our project, and therefore the analysis was left to be mostly up to our ears as Jim suggested is usually more effective anyway. Although he believes this is more than sufficient, it would have been cool to be able to record the speaker with a very nice microphone and really see what we are hearing. Throughout our project we relearned so many things from our course from how we hear tones to how sound it transmitted, and of course how a speaker functions, from first input to final output. We got to really see this process through and gain a strong understanding of what goes into projecting sound. We also gained many skills that we were particularly interested in- in designing and designing for manufacturing. We definitely learned a lot of lessons in this area (most of which are included throughout this blog) and have taken a lot from this project.