This post is the second in a series about the Stuart Cary Welch Islamic and South Asian Photograph Collection written by the project’s staff and student catalogers in the Digital Images and Slides Collections of the Fine Arts Library. 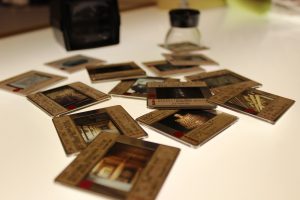 Slides on the light table

Before the widespread availability of high-quality digital images, patrons at the Fine Arts Library viewed images on 35mm film slides, strips of developed film housed in a lightweight metal, plastic, or paper frame. These could be viewed through a slide projector, or at a light table–the Fine Arts Library still has some of these tables in our Lamont location. The library also has over 607,000 slides left from these days, and most scholars and professionals would have kept their own image collections as well. However, this was not always the case. Stuart Cary Welch, the former curator of Indian and Later Islamic art at Harvard, owned a collection of approximately 65,000 slides, which he left to the Fine Arts Library. In a memorial essay for Martin Dickson, “Salute to a Coauthor,” Welch later recalled that when he began amassing his slides, a colleague of his “spurned their use as not quite honorable, akin to cheating at cards.”[1] However unorthodox his methods may have been at the time, they were eventually adopted across the field of Islamic and Indian art. 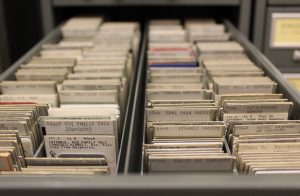 Like any analogue technology, the clarity and resolution of 35mm slides was dependent on the type of film used and the developing technique. Most of the Stuart Cary Welch collection was photographed on Kodachrome, a proprietary film and emulsion technique owned by Kodak and popular throughout the 20th century. Kodachrome was prized for its archival qualities, since the color dye was added to the film surface in layers during the developing process, allowing for greater clarity, nuance, and pigment stability. However, like all archival materials, slide images degrade over time. The Fine Arts Library staff and our team of photographers has been working to preserve these images by re-photographing the physical slide, and then editing this digital image to restore and their original color balance. 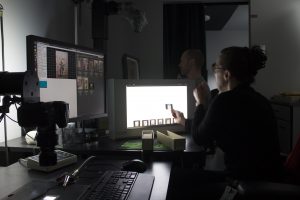 Slides also fostered a unique collaborative way of working. Welch recalled that Martin Dickson, a professor of Persian Studies at Princeton, “underwent trial by color slide” in 1960 upon first visiting the Welch residence to discuss the project that became The Houghton Shahnama.[2]  Veterans of the Fine Arts Library will recall a time when professors prepared for their lectures by sorting slides side by side on a light table and loading them into a carousel. Welch collected images from across America, Europe, the Middle East, and India, and then manually reconstructed manuscripts and artistic communities by grouping dispersed images in the same carousels. As we inventory Welch’s slides, we often come across these carousels, filled with images from his publications and lectures. 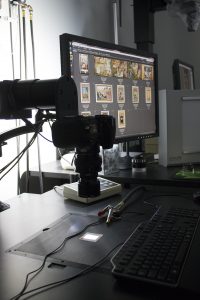 Today, it is so easy to access high-quality digital images that we forget the meticulous processes that earlier scholars went through to assemble their image collections. Now that 35mm slide technology is no longer in use, these slides become artifacts of a formative period in the discipline of art history. Our next post will cover some of the treasures of this exciting research collection.