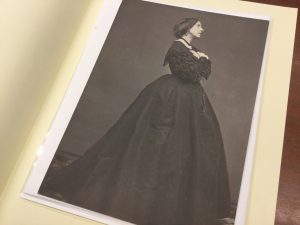 Here you see the wide range in tonality and richness in colors. Indeed, monochrome can be very colorful. We are so glad that many of these salt prints have remained in good condition, such that the facial expressions and details of clothing and accessories for each sitter are still astonishingly clear.

In collaboration with the American Institute for Conservation of Historic and Artistic Works, and Houghton Library, Harvard Library’s Weissman Preservation Center (WPC) is hosting a symposium on the Salted Paper Prints from the Harvard Fine Arts Library’s historic photographs collection on September 14th and 15th. During the two-day symposium, a hands-on workshop hosted by the Northeast Document Conservation Center will allow participants to explore the chemistry and artistic nuance of creating salted paper prints. A brief lecture will acquaint the participants with the basic chemistry and variations of the process and discuss preservation concerns. 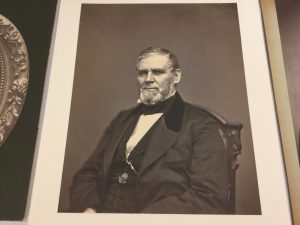 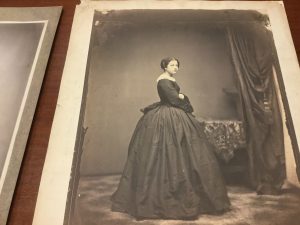 The salted paper print was an early negative/positive printing process developed by William Henry Fox Talbot in England in the 1830s. Many beautiful examples of this process were created in the 19th century and can be found in a variety of photograph collections.

Read more about the symposium and how to register.

Read the previous post about the Salted Paper Prints Symposium.

Lucy in the Sky Book artist Peter Malutzki became interested with “selfies” and especially the way young women posed themselves for display on the Internet.  He reused images found online to create a book about fantasy and self-representation, Lucy in the Sky; Big Brother is Watching You.  Superimposed are the words from the Beatles’ song, Lucy in the Sky, a text he found a fitting juxtaposition to the self-presentation of these pictures.

Malutzki has been making books, using a wide variety of found materials and printing techniques, for decades.  With his partner Ines von Ketelhodt, he undertook a 50-volume set created over 10 years and based on a story by Jorge Luis Borges.  Entitled Zweite Enzyklopädie von Tlön, it evokes in visual terms a lost society like the one described in Borges’ story Tlön, Uqbar, Orbis Tertius.