Restless Journey: Finding a Place to Fit In But Not to Settle

A story of a Harvard student going through IVF

The Atlantic has recently published JFK’s 1935 Harvard application. It is fascinating to see how the school’s application process has evolved in the past 8 decades. Though JFK’s essay revealed that social status and personal connection were primarily the keys to Harvard admission, which might still be the case in today’s world, I think it is (nearly) fair to say that our school is now valuing more about prospective students’ appetite on solving the world’s problems and their EQs.

The essay Qs I was given during my admission was the following:

I am not here to prove to you that my application essay was the model answer. Rather, I want to share with you my personal story, in which it has sharpened who I am today.

My Choice Reflects My Hopes, Not My Fears

At the age of 18, I left Hong Kong and came to a small town in Alabama. I was told that the upcoming year would be adventurous and joyful because Guin High School was ready for an exchange student like me.

I arrived at midnight to a cold and empty airport and was greeted by my host mom, Kristin. During the long and quiet ride home, Kristin’s only conversation was to tell me that she had an 8 year old daughter. To this day, Kristin’s background is still a mystery. I don’t understand why she applied to be a host family. She was never interested in my culture or education.

Little did I know my whole world would change again overnight. Kristin told me she was unemployed, broke and needed to move in with her father, who lived in Niceville, Florida. My suitcases were not yet unpacked, but I had to move again. Facing an unknown future, I was scared. No one in Alabama knew I had left and no one in Florida was expecting me. It was not the exchange program experience I had foreseen.

After a 6-hour road trip, we arrived at Kristin’s father’s home. My new host grandfather was a Vietnam War veteran with post-traumatic stress disorder. He was shocked and unprepared to ‘adopt’ me. I was no longer the exchange student on a mission to experience American life; I was now a foreigner in a mental health patient’s home. My only hope was to survive.

There were days when the house was empty and so was the kitchen pantry. Even though I had a mailing address, the life I was experiencing was that of a homeless person. Starvation became a daily routine. The only access to basic necessities was through school. I grabbed extra food from the school lunch program and signed up for culinary class because making meals was  part of the curriculum. To fight hunger, I even ate my classmate’s leftovers. Just when I thought I could be self-sufficient, my experience took a dangerous turn.

One night, when the grandfather returned home from work, we were alone in the house. He came to the kitchen where I was doing homework and stood extremely close to me. His nose was less than an inch from my neck and I could feel his breath. He kept shouting, “I hate you woman! I have guns in this house!” I tried to escape the kitchen but he blocked me. I asked myself, “Do I have to fight for my life?” I burst into tears. When the grandfather spit in my face, I turned around and threatened him with a kitchen knife screaming, “Stay away from me!” I do not recall how long I held the knife, but he eventually stepped back and left the kitchen. I knew if I did not leave that house, I would not survive.

My plan to escape without alarming the grandfather was to use the school bus. My bus driver never disappointed me. He picked me up every morning at 6 a.m., rain or shine. The night was long and lonely. I put my arms around my suitcase, sat in my room and prayed. The bus arrived and my driver made a joking comment about my suitcase. I choked out, “Get me out of here, please!” The moment the doors of the bus closed, I knew I would be safe. I had overcome fear by taking a leap of faith.

In the end, my year did turn out to be adventurous and joyful. I found a family and friends with whom I have stayed connected to this day. I had empowering experiences traveling and competing with the high school forensics team. I was able to sleep, study and assuage my literal as well as emotional hunger. At the end of the year I received a scholarship to study at the University of Nebraska. Through this experience I learned that I could overcome powerful negative situations, a formative lesson that continues to shape the person I am.

Your heart leads you to destiny 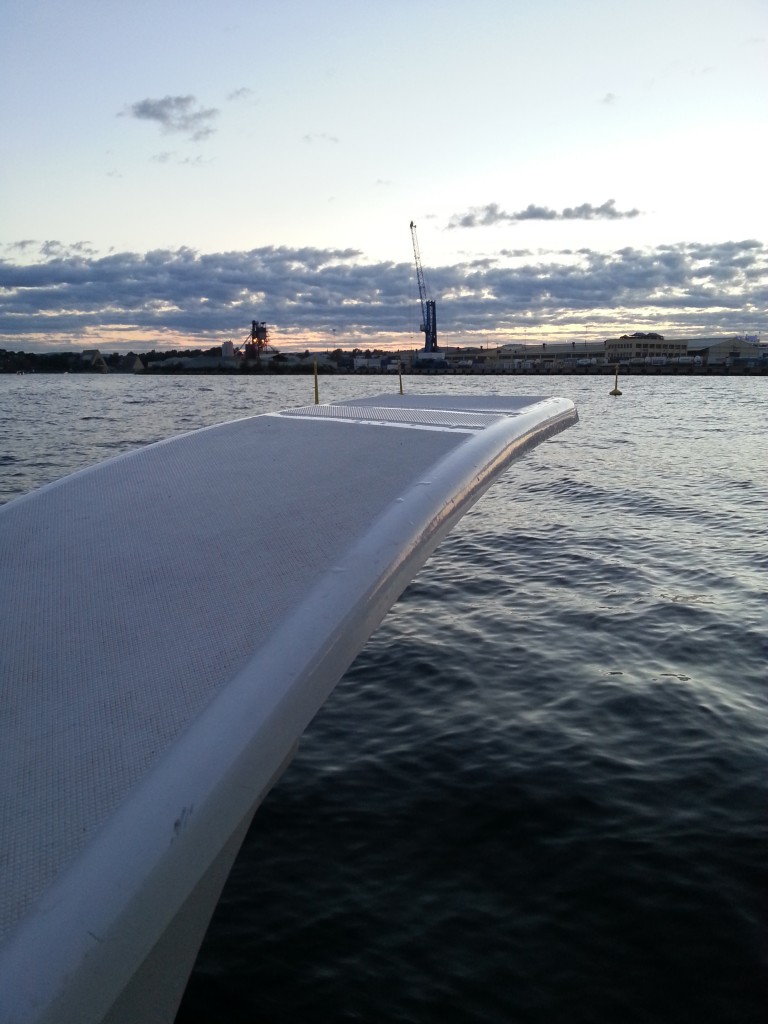 I am fortunate enough to have several job interview(s) after graduation. But as it turns out, I have yet to meet a company that excites me. Some are just not a good fit. A good friend of mine once told me that we have to be thankful for those whom rejected us. It is because they do us a huge favor by preventing us from ‘disasters’ – I think that is VERY TRUE.

For the past 3 years at Harvard, I was trained to be in a competitive environment (thanks to the traditional school / GPA system…). It wasn’t a hostile – ‘dog eats dog’ situation, but rather a ‘race’. A race that requires you to correctly answer numerous Qs in the least amount of time; a race that pushes you to be the exceptional among others.

I start to realize that type of environment has turned me into someone that relies on validation. I became obsessed with score, prizes and judgement from others. It seems to me that I have been using the whole job hunting / interview process as a way to validate myself, in the absence of exams and scoring. I felt devastated when someone rejected me or criticized my qualification; I felt less of myself  when I didn’t land a job that seems to be related to my major.

I felt excited when someone was inviting me to interviews, yet deep deep down, I secretly prayed for not being employed.  I get goosebumps when someone is showing interest to hire me or telling me a ‘start date’.

So I then realized…I was using the job application system for self validation. I need to stop.

For the past few days, I resumed my meditation routine. It is my way to listen to my own intuition. I always receive good vibes or even messages while meditating. Here are the words I received these days:

“circumstances and judgement do not define your characters, your value and your souls.”

“you are empowered by love.”

“you are much bigger than you thought about yourself.”

“you must treasure what you have now. Your freedom is luxury.”

“your heart leads to you destiny.”

If you ask me what I want to do after graduation, my heart is telling you that I don’t want to work for somebody. I want to build something that I can own and treasure.

I am on the road called ‘my own destiny’.

A nation to call home?

Just a little over 2 weeks ago, me and my husband became US citizens. It is still surreal to us. 20 years of hardship from being an exchange student in the most rural town in the country to a Silicon Valley homeowner. We are now given a new nationality – American.

I guess the pride of being an American …or let say ‘owning’ a nationality still seems a bit ‘foreign’ to us. Born and raised in Hong Kong, the former colony of United Kingdom, we were taught in British English. We were surrounded by UK flags and influenced by their lifestyle, anything from having baked beans to afternoon tea. I still remember we used to have Queen Elizabeth’s portrait hanging on the wall at school.

But then when Hong Kong was handed over to China in the late 90s, all the sudden, we felt like we were the orphans being ‘adopted’ by our biological parent (China). This is worse than a divorce settlement. No joint custody whatsoever!

We have been carrying an issue called ‘identity confusion’. Feeling like somewhat British-ish, yet we have no status to claim but to accept the fact that our ‘nationality’ is China.

I am not the only person got confused by our identity. Even the officials across the country (US) are confused, too! When we filed the paper for US citizenship, the officer particularly asked us to declare ‘China’ as our nationality (not Hong Kong). But during the naturalization ceremony, the facilitator/ host listed ‘Hong Kong’ as a country and asked people to cheer if  they were originally from there.

To make fun of the situation,  my husband and I decided to stand up and cheered when they announced United Kingdom. But I kid you not, that was a very awkward moment…all the Chinese mainlanders (almost 40% of the audiences in the naturalization ceremony) were staring at us like we were aliens.

No one in our lives taught us what patriotism is and how to act patriotic… should I hang an U.S. flag outside my door? Or do I need to develop a family tradition for July 4th?  I believe this is not something you can force someone to do so. It is a mutual feeling. Something that grow organically over the years.

While I was still trying to figure out how I should embrace my new nationality,  49 lives were taken in Orlando – all killed by a domestic abuser/mental unstable person who legally owned assault weapons.  And for the past 72 hours, at least 4 people (all minority) were shot by police across the country. One of the victims had to live stream the incident on Facebook as 911 isn’t the option at all!

Then 5 polices were ambushed by a black sniper and dozens were injuries in Dallas last night….

If I had children, how should I teach him/her? Would I still be able to tell them humanity and kindness still exist? should I show them trust? What should I do about embracing our nationality while people are being killed for racial bias, hatred, and revenge? How do I explain to my children that mommy and daddy chose to stay in this country despite all the injustice and non-sense violence?

And if something happens to me…should I live stream the event on Facebook rather than calling the police?

Oh America, what should I tell my children?

© 2020 Restless Journey: Finding a Place to Fit In But Not to Settle