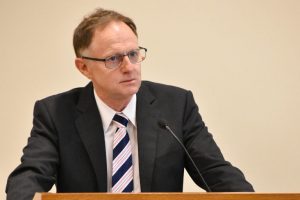 On March 27 and 28, Stephen Gageler AC, LL.M. ’87, a justice of the High Court of Australia, returned to Harvard Law School to meet with faculty members, participate in classes, and speak on “Alternative Facts in the Courts.”

Gageler studied law and economics at the Australian National University before earning an LL.M. at Harvard Law School. After serving as a lawyer in Australia’s federal Attorney-General’s Department, he practiced at the private bar in Sydney, where he specialized in constitutional, administrative, and commercial law. In 2008, he became Solicitor-General of Australia, the nation’s second highest law officer. He was appointed as a justice in 2012, joining six other judges on the highest court in Australia’s judicial system.

Read about his talk on Harvard Law Today.