Every Day is Ashura, Every Land is Karbala 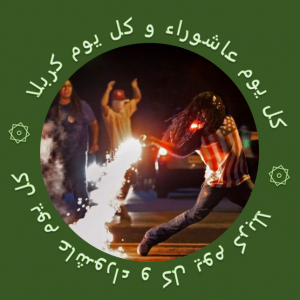 In Week 5, we learned about how Shii Muslims view the cosmic significance of the massacre of the Imam Husayn and members of the Ahl al-Bayt (the family of the Prophet Muhammad) at Karbala in Iraq in 680 CE, in short, that it was not, in their view, just a political-historical tragedy, but rather a result or example of the eternal battle between Justice and Injustice.

In August 2014 and the months following, I was riveted by the death of Michael Brown, an 18-year old black teenager who was shot and killed by Darren Wilson, a white police officer in Ferguson, MO. A few months, later in November, Wilson a grand jury declined to indict him. This turn of events breathed new life into a national movement against the inordinate use of state-sanctioned violence against black and brown people, especially black men, now known as Black Lives Matter.

The Pulitzer Prize-winning photograph I used for this digital montage was originally taken by Robert Cohen of the St. Louis Post-Dispatch on the night of Aug. 13, 2014. Edward Crawford is throwing a tear-gas canister back at police. To me, this image represents not just the specific tragedy of Michael Brown’s death, nor even the larger, systemic violence of police brutality in this country, but rather, the eternally cosmic battle between Good and Evil, between Justice and Injustice. Taking the original image, I digitally imposed it on a field of green, representing the Prophet and his family, with the words, “Every day is Ashura and every land is Karbala” surrounding it in white.