The Best of All Creation 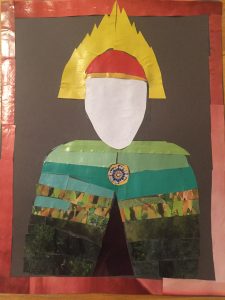 In Week 4, we learned about one of the fundamental aspects of Islam–devotion to the Prophet Muhammad. We discussed the various roles the Prophet occupies in the Muslim religious imaginary: divine messenger, religious authority, moral guide, unparalleled intercessor, and mystical paradigm. This piece, a paper collage I entitled, “The Best of All Creation,” references the Prophet’s role as an intercessor without equal between believers and God.

One of the stories I found the most interesting this semester was that of the 13th-century Egyptian poet and mystic, al-Busiri, who, as he was recovering from a stroke that left him paralyzed, wrote an ode popularly known as al-Burda or, “The Mantle.” The title is a reference to a story that one of the Prophet’s poetic rivals, Ka’b ibn Zuhair who repented of his hostility to Muhammad and wrote a poem asking for mercy. In response, the Prophet is said to have thrown his mantle or burda around Zuhair, thus creating a new symbol for the prophet’s forgiveness. Al-Busiri, in the 13th century, then had a dream where the Prophet was so pleased with the poem that he placed his burda around al-Busiri and the latter woke up healed. Since then, the later poem, whose actual title is “The Celestial Lights in Praise of the Best of Creation,” has become a staple of popular Muslim devotion.

In my collage, the mantle or Burda takes prominence with its striking use of different shades of green to denote the Prophet’s cloak. I took inspiration for the color from the Turkic manuscript illustrations of the Prophet’s isra and mi’raj. As in some portrayals, I covered the face of Muhammad in white and his whole head is framed in the fire of prophethood.

Do You Love Me Above All?