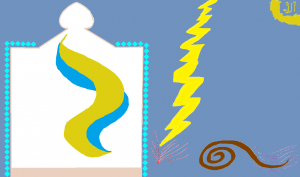 For my final post, I took inspiration from a section of Attar’s The Conference of the Birds, a 12th-century Persian epic poem, or mathnawi, that serves as an extended allusion to the Sufi mystical path towards union with God. The section that spoke most to me is called “Ayaz’s Sickness,” serves as one of the hoopoe’s birds parable-like responses to the birds excuses to undertake their journey to search for the one who would be their king, the Simorgh. The plot of Ayaz’s Sickness is quite simple: Ayaz falls ill due to the curse of the Evil Eye, and the king Mahmoud, who loves him, sends his messenger with utmost speed to convey his love and guard Ayaz, but when the messenger arrives at Ayaz’s respite, he finds that the king has outpaced him somehow and is willing to submit to Mahmoud’s punishment, but Mahmoud is merciful as the messenger “could not know the hidden ways by which we lovers go.”

Ayaz’s Sickness, in my reading, is used to exhort people on their spiritual paths by reminding them that God’s love is already present in their lives, if only they could become aware of it. I interpret Mahmoud as God, Ayaz as humanity, or more specifically, a spiritual seeker, and the messenger as religious authorities who do have a divine command to inform humanity of God’s will to love us but are not that love itself.

As a gay person, the fact that a same-sex loving relationship could be so positively used as to illustrate divine love is beyond encouraging.

This digital painting shows the scene of Ayaz and Mahmoud’s reunion as the lightning flashes and the messenger has not yet arrived, though he is moving quickly. The characters are identified as the word Allah in the top right corner is drawn in a matching color to Mahmoud. Their tight embrace is the hope and promise of divine union.