I spotted this in my Facebook feed earlier today: A map (created by Rightsize Newton) showing the location of the more than 5,000 Newton voters who signed the petition late last year which is leading to the upcoming Northland referendum. The map is almost certain to reflect voting patterns on March 3: 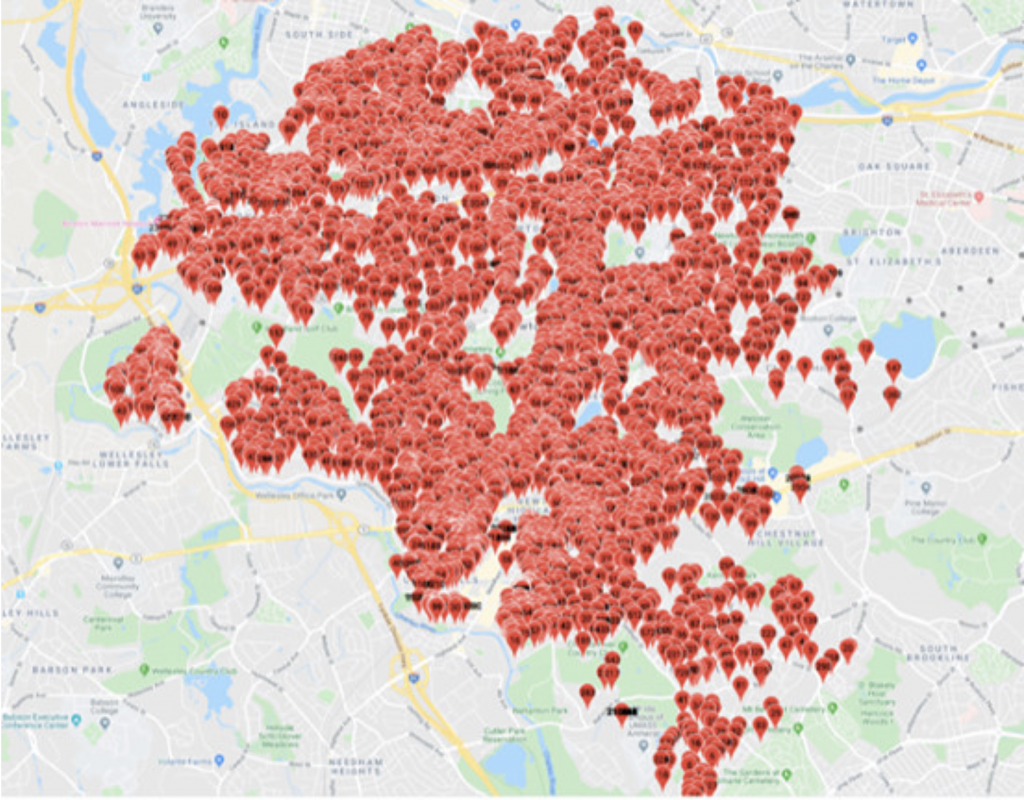 Northland is a 22-acre development project planned for Newton Upper Falls (Ward 5), adjacent to the heavily used Needham Street commercial area. It represents a massive profit opportunity for the developer, Northland Investment Corp., which wants to maximize the value of its land by squeezing as much high-rent, luxury real estate into the parcel as possible.

Northland represents something else entirely to people who live, work, and attend nearby schools.

The area has long-standing traffic problems going back many decades. It’s been that way since I was growing up in Newton in the 1970s, and still is today when I pass through for shopping or business. The addition of 800 additional units of mostly luxury housing and more than 100,000 square feet of new retail space will make the situation far worse for anyone using Needham Street/Highland Avenue or living/working nearby.

Does anyone remember the debacle with Avalon Bay on Needham Street? Hundreds of units were built, with the developer and political supporters (including some names in the list above) promising minimal impact on Newton Public Schools — perhaps a few dozen additional students, they said.

What actually happened: Countryside Elementary grew to more than 500 students. It was bad. Crowded classrooms, hallways used for aftercare and music class, and added costs to hire staff, spend more on maintenance, and carry out the inevitable school redistricting.

Increases in traffic and school enrollment as well as other infrastructure investments required to satisfy Northland Investment Corp.’s profit motives represent real costs for Newton. This is not only something for thousands of households in Newton Upper Falls and the Highlands to worry about, either. It will impact every taxpayer in the city, as school budgets rise, delays impact businesses and residents, and the costs of maintaining more heavily used public infrastructure rise sharply.

It should therefore come as no surprise that support for the anti-Northland petition was so strong city-wide. Some might think that this is a “local village” issue, with most people against Northland Investment Corp.’s development plans hailing mostly from Upper Falls and Newton Highlands, and perhaps a smaller number from north side neighborhoods disproportionately impacted by the massive developments planned for Riverside and “Hello Washington Street.”

The map shows that support for “No to Northland” actually extends across the city, including Newton Center, Oak Hill, Newton Corner, and Chestnut Hill.

Incidentally, announcing that you oppose the current plans by Northland Investment Corp. is not pleasant. You get called names on social media (see Newton NIMBY vs. CODS). The deck is stacked against you in supposedly neutral debates. It’s even possible to get bullied in public by an elected city councillor (Brenda Noel, Ward 6) in the pro-Northland Investment Corp. “Yes” camp.

Despite these attacks and misrepresentations, it should be noted that not one of the “No to Northland” supporters cares about preserving disused industrial and commercial lots. What they’re rightly concerned about is the scale of the project, its impact on an already overwhelmed village, and the costs that households across the city will be forced to bear if a politically connected developer is yet again allowed to profit at the expense of Newton residents.