HomeThe number of Harvard Extension degrees triple in 13 years. Why?

In 13 years, the number of degrees awarded by the Harvard Extension School has nearly tripled to 1,340 degrees in 2021, most of them ALMs. What’s going on?

Here’s a screenshot of the Gazette article from my 2008 graduation, showing the breakdown of degrees. 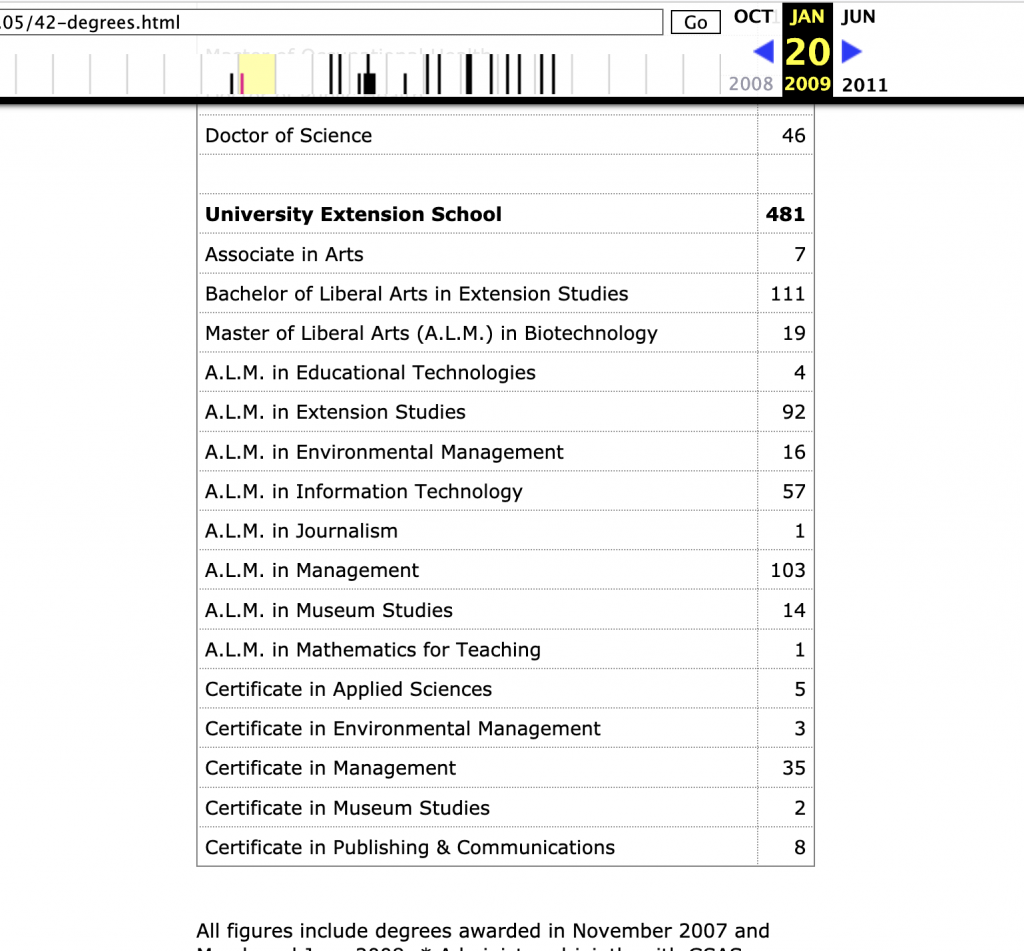 “In Extension Studies” are liberal arts ALB/ALM degrees; at the time professional ALM degrees were labelled by concentration. Certificate programs no longer exist.

The letter stated the change would allow the Extension School to recruit more talented faculty from other area schools as well as working professionals from outside Harvard, which is exactly what happened.

The Harvard Extension School did this because it wanted to expand the professional programs but couldn’t do it, even with the loose “Harvard Affiliate” standards at the time, which included Harvard’s professional staff counting as a Harvard instructor.

The 2010 letter, which came out during the tenure of former Dean Michael Shinagel, was addressing a problem HES encountered in expanding its professional degree programs. Unlike the Harvard Faculty of Arts and Sciences, which includes Harvard College and the Graduate School of Arts and Sciences, some professional Harvard schools did not want its faculty or instructors to participate in any Extension programs, even if it was at night.

This was the case with the Harvard Business School. For years, the only HBS faculty teaching HES classes in finance, management, or business were retired. Even now, there is only a single faculty member listed in the Extension School instructor list:

The Extension School also decided to offer degrees in areas in which no Harvard faculty exist, such as journalism and digital media arts.

Expansion of learning opportunities across the globe has been a positive trend, as has new degree types serving the needs of students and industry. The HES biotechnology degrees are a great example of this.

But the idea that you can receive a degree from Harvard without ever taking a class with Harvard faculty members is a major mistake. It’s a sharp deviation from the Extension School’s mission to offer a Harvard academic experience led by Harvard faculty members, and opens up the school and alumni to criticism that HES degrees aren’t “real” Harvard degrees.

I’m not knocking the hard work of students or the non-Harvard faculty teaching such classes. I too have taken classes with non-Harvard faculty that counted toward my degree, and some were top-notch and truly global experts in their fields, such as the late Thomas J. O’Connor. This was sometimes through the Harvard Summer School, which is also open to Harvard College students. And Harvard certainly has a long history with visiting faculty from other institutions.

But the idea that it’s possible to get a Harvard degree without taking any classes with Harvard faculty? The school might as well just let students transfer in 100% of class credit from other schools.

And that’s not right. As I stated in my final post on the old Harvard Extended blog:

While recruiting professors from Boston University, Bentley, Boston College and UMass will improve the quality of the instruction in these programs, it is a tacit acknowledgment that the professional degree programs have failed to fit the model established by the Extension School to offer a Harvard academic experience led by Harvard faculty members to students. It further sets a precedent for launching new professional degree programs that have no connection to the University’s existing areas of study, and opens the door to criticism that Harvard Extension School degrees aren’t “real” degrees because they no longer represent study under Harvard’s top-notch faculty.

What can the Extension School do to make things right? The solutions should be obvious.
First, double efforts to encourage faculty from other Harvard schools to participate in HES programs. This is particularly an issue for the Harvard Business School, which has its own priorities, competitive considerations, and brand considerations. But dangle revenue shares or other profitable incentives/partnerships – such as requirements that ALM degree candidates must successfully complete an HBS certificate – might help in this regard. This latter scenario would also align the ALM Management degrees with some of the cutting-edge research and teaching at the Harvard Business School.
For programs that don’t have any available Harvard faculty, hire dedicated HES instructors responsible for teaching, curriculum, and research. HES has money, thanks to the growth of the degree programs, and it has done this in the past for some liberal arts fields. However, as it’s also part of the Harvard Faculty of Arts & Sciences, there may be some additional considerations for instructors outside of the liberal arts.
See also: Harvard Extension School success stories from the past year
PLEASE SHARE THIS POST VIA FACEBOOK, LINKEDIN, TWITTER, OR EMAIL!