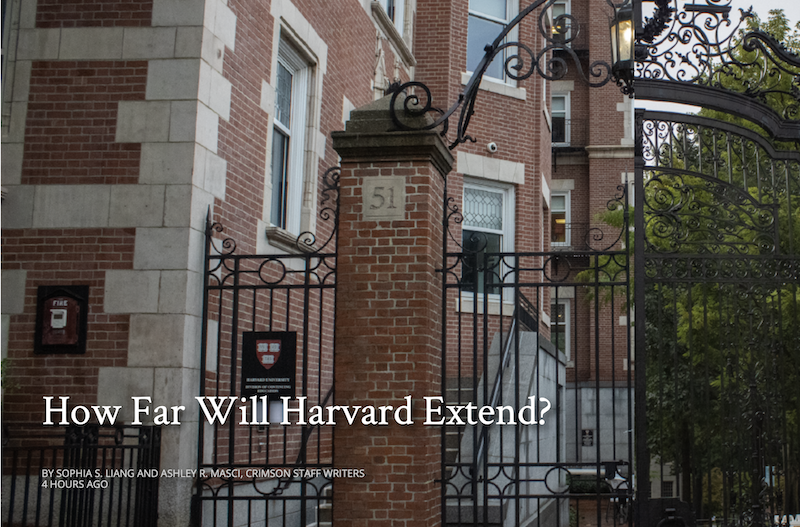 There’s a really good feature in The Crimson about Harvard Extension School students. The writers, Associate Magazine Editor Sophia S. Liang and Staff Writer Ashley R. Masci, did a lot of research, and also took the time to interview current students and faculty. Some relevant excerpts:

Plenty of instructors come from outside of academia, too, ranging from filmmakers to art theft investigators to pharmaceutical executives. Among the instructors who taught Extension School courses during the 2020-21 school year, only about a third held concurrent teaching positions at other Harvard schools. Of these, 40 percent were professors, while 60 percent were non-tenure-track lecturers or preceptors.

I expected these numbers to be lower than 1/3, as some of the professional degree programs have almost no access to Harvard instructors, such as the ALM Management degree (see The number of Harvard Extension degrees triple in 13 years. Why?). On the other hand, other programs have better Harvard faculty numbers, including the Extension School’s undergraduate ALB program, the liberal arts ALMs, and the powerhouse Harvard Extension Post-Bacc program for people interested in going to medical school.

Another interesting finding I was not aware of:

The College’s Undergraduate Council went so far as to analyze the entire Extension School course catalog and concluded that the classes were extremely similar, in content and quality, to those offered at the College.

No other information was given. And:

The faculty handbook for HES instructors calls the school’s easy accessibility “a wrinkle,” reading: “Open enrollment and reasonable tuitions have long been cornerstones, but they mean that we ask you to provide a Harvard education without the initial screening provided by a Harvard admissions office. Quality control is in your hands.”

Nevertheless, Harvard faculty generally love teaching the Extension School. I knew this from personal experience – one of my professors, the late Phillip Kuhn, was very passionate about extending his classes on modern Chinese history to Extension students at night. Here’s what some others had to say in the Crimson feature:

Regardless of their background, instructors report feeling deeply fulfilled by their work at the Extension School. Across the board, those interviewed for this piece found that the remarkable diversity of students in their classrooms translated to clear benefits: a more collaborative atmosphere, broader perspectives on course content, greater intrinsic motivation for learning. Those who teach at Harvard’s other schools also maintain that the quality of education offered at the Extension School is virtually identical (sometimes literally — John T. Hamilton, a professor of German and Comparative Literature, livestreams his College lectures and supplements them with Zoom office hours for Extension School students).

Or, as Puchner puts it, “Some of the best Harvard College students are as good as my Extension students.”

The feature delves into some uncomfortable issues around Harvard Extension School programs that I have written about previously, such as the misleading and demeaning “Extension Studies” designation that causes real problems for some graduates. The Crimson talked to one such student:

Stull has been told that she would need to redo some of her HES classes at a different institution in order to qualify for the Navy psychology Ph.D. program she is hoping to enter after earning her master’s. Although it may be the course content that misaligns with the Navy program’s requirements, Stull feels that her degree’s contrived name works against her.

“My diploma doesn’t necessarily reflect their expectations of what a psych student should have,” Stull says. “The Harvard name helps me seem like I’m capable and prestigious enough to be a good asset to that particular school, but my accreditation, when it comes to the courses I’ve already taken, is questioned — the integrity of it is questioned.”

Another Navy officer and Extension School graduate had similar questions about the “Extension Studies” designation:

Going into the Extension School, Johnson was unaware that he would walk out with a “Master of Liberal Arts in Extension Studies” degree. Though the strange name has raised a few questions from employers thus far, it hasn’t posed a major barrier, he said. Still, Johnson acknowledges that his established career in the military put him in a unique position, and he could easily imagine a situation where the name would matter much more.

“I took no courses ‘in extension studies,’” he says. “It’s very odd to have a degree in something you never took a course in. I don’t know who in the IT world, who in the medical world, who in the nonprofit sector is going to look at that without a raised eyebrow, to say, ‘Exactly what does this mean?’”

The reporters did not get much from Dean Coleman about the Extension Studies issue:

In an emailed statement, Dean of the Division of Continuing Education Nancy Coleman wrote that she and other administrators have engaged in conversations with students and alumni about the issue. She denied the characterization of this topic as a “controversy,” maintaining that the DCE is not “necessarily in disagreement” about the proposed degree name change.

I disagree. Coleman and some Harvard officers at the Extension School have done everything in their power to bury this issue, going so far to prevent a student activist (the founder of the Extension Studies Removal Initiative, quoted in the article) from running for student government by rigging HESA elections. Per an April article in The Crimson, Jura Wins Extension School Student Government Election, Commits to Transparency After Election Rules Dispute, and the statements made by HESA and Extension School officers:

When multiple people – including Harvard DCE employees – are saying the same thing, backed up by a video clip and a detailed explanation from the DSO dean defending the new HESA election policies, I am strongly inclined to believe that evidence, rather than the official spin put out by the Extension School. In my opinion, gleaned from many years of observing the DCE administration over multiple administrations, the current dean and some HES staff would rather that the name issue simply go away.

Regardless, this shouldn’t detract from The Crimson’s interviews with Extension School students and graduates sharing their stories. It really makes us seem more human than the Harvard Extension School stereotypes that used to be the focus of Crimson coverage.