Updated – see below. Big news this morning: The Harvard College Undergraduate Council unanimously supported a bill that supports a student-led movement to remove “in Extension Studies” from Harvard Extension School degrees. The Extension School ALB candidate who is responsible for getting the bill in front of the UC, Kody Christiansen, described what happened on a private Facebook page:

Yesterday (March 27th, 2022), I was asked to speak at the UC meeting last minute by the Harvard College student body President. I went, I spoke my truth, told my story about how I got to Harvard, and told them how much their support for the bill I proposed last semester (a bill asking for the College students to support the removal of “in Extension Studies”) meant to me and so many others. In a wonderfully surprising move, a student sitting next to me, proposed they move my bill to the top for an immediate vote when the meeting was nearly over.
The board approved to move it up.

And it passed with all hands raised in the room! 👏🏻👏🏻

The UC bill contains some interesting language. First, it raises the level of publicity that the UC is willing to give to efforts to remove the “in Extension Studies” designation from ALB degrees. Second, it gives support to HES undergraduates in getting answers from the University on why the change hasn’t been made yet: 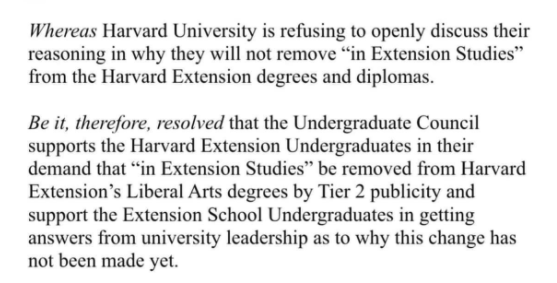 I’ve said it before, and I’ll say it again: The only way to get “in Extension Studies” removed from Harvard Extension School degrees is through vocal, public demands for change. Having the voice of the Harvard College UC makes a real difference.

But what if the University still doesn’t listen?

In my opinion, if the University continues to do nothing, it will likely be necessary to hold demonstrations and other protests that cannot be ignored, just like Harvard graduate students and other groups have done in the past. These public demonstrations will need to take place in front of Mass Hall, where the University administration is headquartered, as well as outside of FAS faculty meetings, gatherings of the Board of Overseers, and meetings of the Harvard Corporation.

ESRI, HESA, and The Crimson

Christiansen leads the Extension Studies Removal Initiative (ESRI) and has been very active lobbying on this issue. He was one of the students interviewed by The Crimson last year and has also laid the groundwork for a Crimson editorial calling for the removal of the demeaning “in Extension Studies” designation from Extension School degrees:

the Extension School’s vague degree labeling process lacks reason and rationale, trivializing the achievement implicit in years of specialized study at the Extension School. Indeed, at the Extension School, students of all backgrounds, ages, and levels of experience are able to spend years honing in on targeted areas of study within disciplines such as global studies, technology, education, and business and management. Ultimately, their degrees ought to reflect their mastery and celebrate the effort students expend to hone and refine their individual interests.

Instead, the degree-naming system stands as a troubling marker of unequal treatment, one that treats field-specific recognition as an exclusive courtesy, rather than as a basic, requisite, and hard-earned honor deserved by all students.

Amazingly, with the recent Crimson and UC support, ESRI has made more progress on this issue in the last two years than the Division of Continuing Education (which oversees the Harvard Extension School) has made during the tenure of the last two deans. Indeed, the current administration went so far as to rig the rules for Harvard Extension Student Association (HESA) elections last year to prevent Christiansen from running and any other HESA officer from getting involved in certain issues that the Division of Continuing Education supposedly is working on.

“I just think this is really important for the dignity of our students, and we represent the entire graduate student community who I think would very forcefully be in favor of this,” said Gabrielle “Gabe” L. Crofford, a Harvard Law School student, while expressing her support for the bill.

Ultimately, the Graduate Council voted to be a signatory on the bill.