An interesting thing happens if you go to Amazon and search for “acid reflux” in the books section. Twelve of the 13 titles on the first page of Amazon’s organic search results are about acid reflux diets. They include everything from Acid Reflux Diet and Cookbook For Dummies to Dropping Acid: The Reflux Diet Cookbook & Cure. The 13th title is not explicitly about acid reflux diets, but rather covers homeopathic treatments (“Natural Alternatives to Nexium, Maalox, Tagamet, Prilosec & Other Acid Blockers: What to Use to Relieve Acid Reflux, Heartburn, and Gastric Ailments“).

Amazingly, there are no books on that first page of search results that talk about modern medical treatments that tens or even hundreds of millions of people across the globe seek out every year. With the release of Acid Reflux & Heartburn In 30 Minutes: A guide to acid reflux, heartburn, and GERD for patients and families earlier this month, my publishing company hopes to change this state of affairs, by giving readers an authoritative yet easy-to-understand source of information about reflux, heartburn, and gastroesophageal reflux disease (GERD).

The author is none other than my father, J. Thomas Lamont, M.D., a gastroenterologist and Harvard Medical School professor who wrote a similar book about Clostridium difficile (an infectuous disease commonly known as C. diff) five years ago. That book has since helped thousands of people, and currently has an average rating of 4.5 out of 5 stars on Amazon, with dozens of reviews describing how the book helped inform and reassure (Examples: “It gave me a lot of information to better enable me to ask the right questions to my doctor” or “nice to find by an experienced MD amid all the gut health hype on the Internet”). Reflux is even more widespread than C. diff, and is another area that he specializes in.

After I noticed that most acid reflux books in the books marketplace deal with diets as opposed to causes and treatments, I agreed that an IN 30 MINUTES book about acid reflux made sense. He submitted a first draft last April, and less than one year later, Acid Reflux & Heartburn In 30 Minutes was ready.

Early reviews have been positive. One reader said:

I wish this had been published years ago. Dr. Lamont has done an outstanding job of refining the tedious medical terminology down to a layman’s level. This is one of the primary advantages of this publication – plain English discussions about GERD and heartburn (HB) in general.

One area that we really tried to get right were illustrations that show the stomach and esophagus, what happens when GERD strikes, and how certain treatments (including surgeries to treat severe reflux) can be applied. I worked closely with the author and an experienced graphic designer, who made some really helpful diagrams, such as this one, showing how reflux occurs: 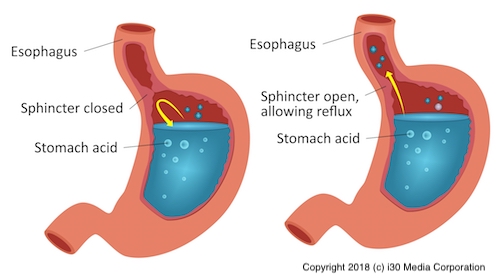 One thing that’s important to stress: This acid reflux book is not a DIY medical guide. Certain tests and treatments require professional evaluation and medicines available only by prescription, so the information in the book is provided to help patients understand what their doctors are recommending and why.

To learn more about the book, check out the companion website, which also includes an acid reflux FAQ as well as a glossary of acid reflux terms. 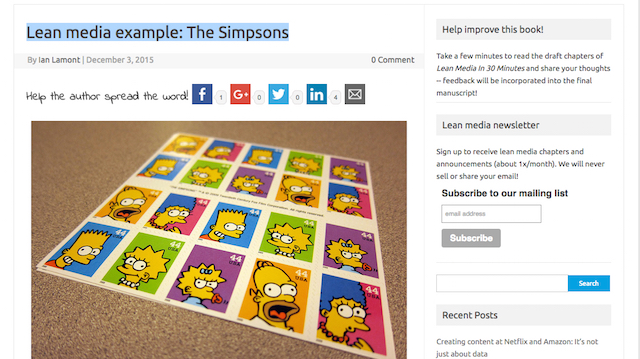 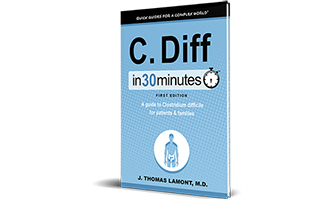 Last month, my publishing company released its first title about a health-related topic: C. Diff In 30 Minutes: A Guide To Clostridium Difficile For Patients & Families. C. diff is an obscure term, but it refers to a common bacterial infection that affects the lower intestine. C. diff in hospitals is a serious problem, and the incidence of C. diff has nearly quadrupled in the past 20 years in the United States, as the following chart shows: Even though C. difficile is a relatively common infectious disease (see What Is C. Diff?) there are limited online resources for patients and families. As of this writing, there is only one other book about the topic available on Amazon. 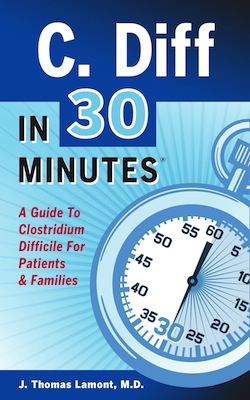 The importance of a C. diff expert

The author of C. Diff In 30 Minutes is my father Thomas Lamont, a gastroenterologist and Harvard researcher who has seen thousands of patients suffering from the ailment. Last year, as I was getting In 30 Minutes guides off the ground, he offered to write this title. I gladly accepted — I’ve been interested in expanding beyond pure software and technology topics, and this would allow me to evaluate how niche topics fare in the health field. Because of his busy schedule, it took some time to release C. Diff In 30 Minutes, but both of us are proud of the result. You can order the C. Diff book here, either as a paperback or as an ebook that can be read on a Kindle, iPad, Nook, or other e-reader.

In addition, I am working on another health-related In 30 Minutes guide. It is also oriented toward patients and families, but does not get into treatments or causes of the disease (sadly, this other ailment cannot be treated). The author is someone who spent more than a decade caring for a sick parent, and not only has expert insights into care-related issues, but will also talk about the impact on families. I’ll reveal more information about the title when it’s released later this summer.