The Isham Memorial Library is pleased to announce that The Tom Everett Collection of Jazz Scores, 1971-2011 is cataloged and open for research.

The collection contains scores, promotional materials, photographs and correspondence from Tom Everett‘s forty-two years at Harvard University. Director of the Harvard Jazz Band from 1971 to 2013, Everett taught the first jazz courses for academic credit at Harvard, beginning with a course through the Harvard Extension School in 1973; his course “The Jazz Tradition” was cross-listed in the Departments of Music and African and African American Studies beginning in 1978.

Included in the Everett Collection are original scores, many arrangements and ephemera from such luminaries as saxophonist Joshua Redman, class of 1991 (Redman toured the Dominican Republic with the Jazz Band in 1988, performing an unaccompanied solo version of In the Mood), composer and pianist Dave Brubeck (the collection contains a 1983 letter to Everett in which the composer of Jazz Goes to College requests academic advice from Everett on behalf of his college-bound son Darius), pianist Teddy Wilson (who in 1935 was the first musician of color to play in Benny Goodman’s band) and several dozen more.

The materials relating to the 1996 residency of trombonist J.J. Johnson are particularly moving, and representative of both the variety of the items in the collection and of the personal vibrancy of Tom Everett. The following introduction to the Johnson materials in the Everett collection was written by former Assistant Keeper of Isham Memorial Library Douglas Freundlich and jazz scholar Michael Heller for an exhibit they created in 2011. 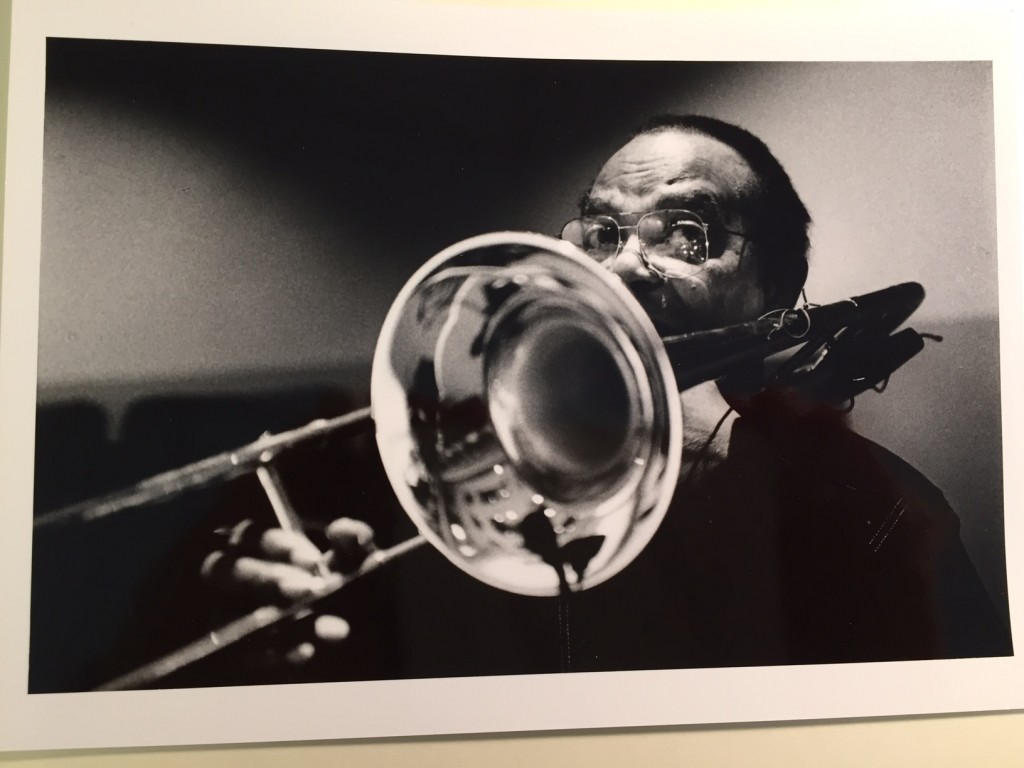 “A trombonist himself, Everett had long idolized the bebop master, faithfully collecting his scores and recordings. The two first met during the 1980s through Everett’s work with the International Trombone Association. When originally invited to do a residency, the shy Johnson was hesitant, and only after five years of coaxing did Everett persuade him to visit. The handwritten excerpt of Johnson’s opening remarks makes reference to Everett’s tenacity in bringing him to the university. The residency solidified their friendship, with Johnson asking Everett to conduct several pieces on his final album, The Brass Orchestra (1997). The two remained close friends until Johnson’s death in 2001. 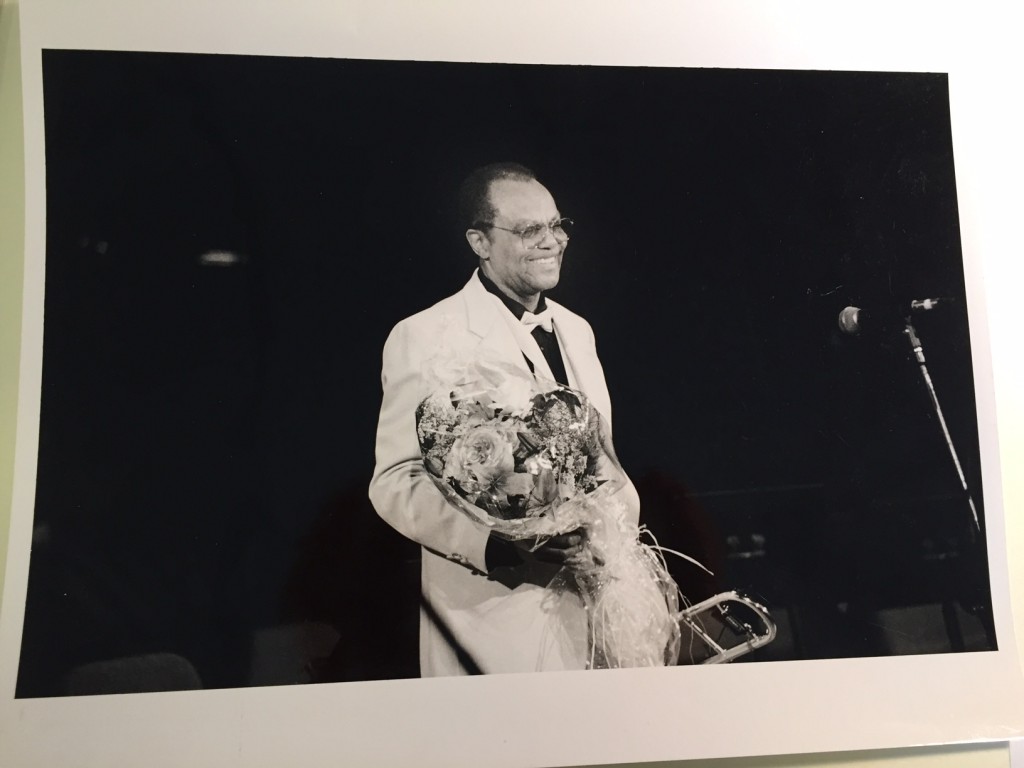 “The photo of Johnson with the band attests to his wry sense of humor. Before the concert, Johnson telephoned Everett with two questions. First, he asked what the band wore during performances, to which Everett responded that the band wore black tuxedos. Next, he asked about the ethnic composition of the band. Here, Everett responded that the band was mostly made up of white musicians, though he regretted that there were not more interested African American students. On the night of the concert, Johnson arrived wearing a ‘reverse’ tuxedo, creating a mirror image of the band members and making a not-so-veiled political statement. 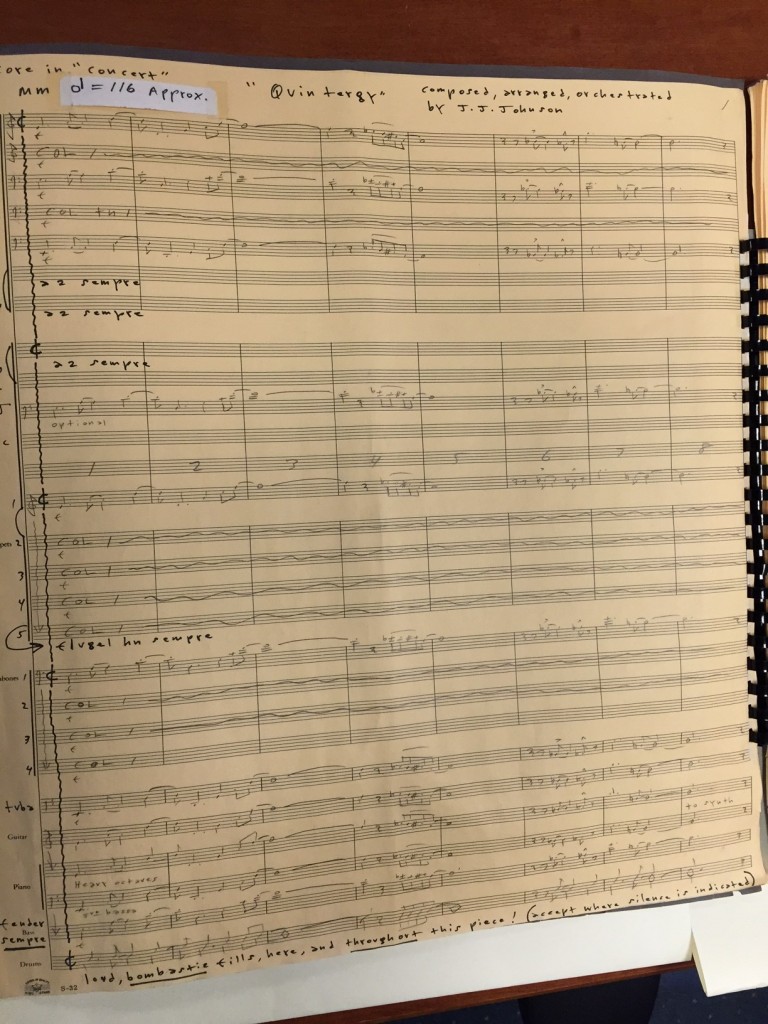 “The large handwritten score of his piece Quintergy was not performed at the initial residency, but was donated by  Johnson a year later for Harvard’s Twenty-Fifth Anniversary Jazz Retrospective. The piece was originally commissioned by the U.S. Air Force’s Airmen of Note. The first page contains extensive instructions stressing the role of the drummer in maintaining the energy of the piece.” 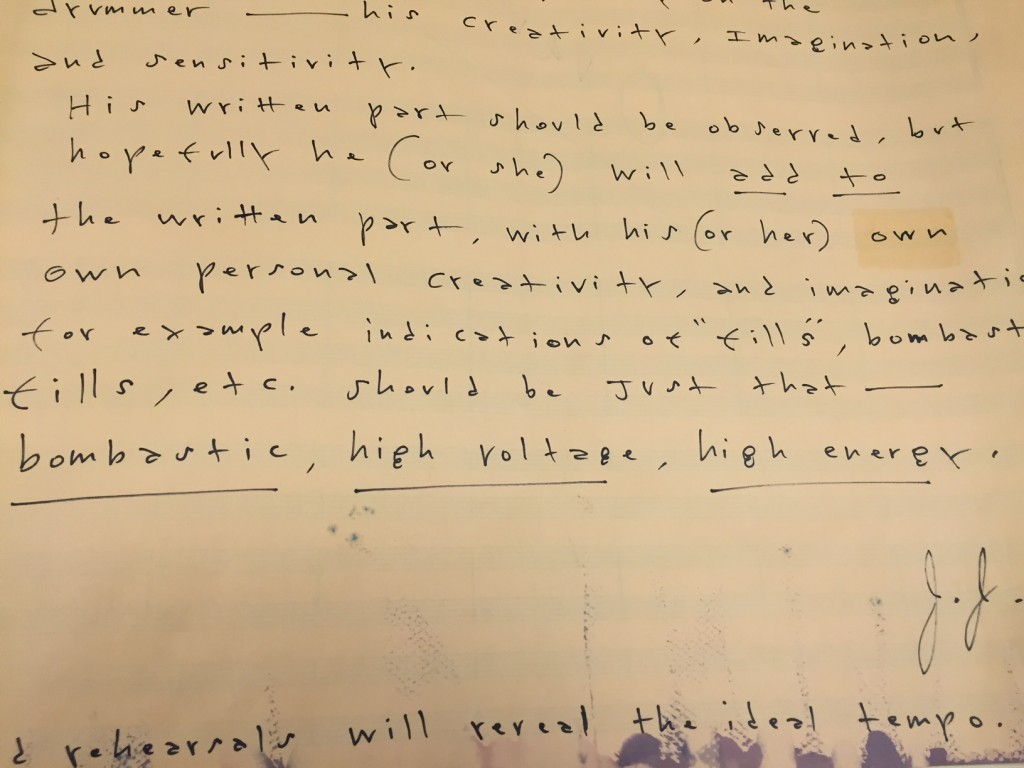 While access to the Everett Collection is unrestricted, please note that reproduction and/or publication of materials subject to copyright requires written permission from a) the copyright owner, her or his heirs or assigns and from b) the Loeb Music Library, owner of the original material.

The latest release of Harvard’s Page Delivery Service (PDS) – the system through which we share our digital scores with the world – is live, and there are a few enhancements to share with you.

We spend a lot of time writing a structural outline for every score we digitize, to make it easier to find works, movements, scenes, and even single arias. While we’ll keep adding that full indexing, it’s now possible to navigate using thumbnail images of each page, as well: when you’re looking at a digitized book or score, click “Expand All,” then “Show Thumbnails” in the left-side navigation frame. This might be an interesting way to get a simple visual overview of a work’s structure, and I have to admit that for some scores, it’s just fun; take a look at the thumbnails for this copy of Debussy’s La Boîte à Joujoux: Ballet pour Enfants, and I think you’ll see what I mean.

The next addition is a “Cite this Resource” button: click this to get descriptions and persistent links for both the entire score and the single page you’re looking at. These aren’t perfectly-formatted citations, but they gather a lot of the information you’ll need in a bibliography or caption. Here’s a screenshot, using a page from La Boîte à Joujoux as an example: And finally, the full print-to-PDF option is back! Requests for 10 or fewer pages are delivered in real time; if you request more than 10 pages, you’ll be sent a link to the PDF once it’s been processed (those links remain available for 7 days).

Ready to start exploring? Digital Scores and Libretti is, of course, my favorite, but check out other Digital Collections of Harvard College Library and Web-Accessible Collections at Harvard University for photographs, pamphlets, manuscripts, books, maps, and other rare materials ranging from Digital Papyri to Latin American Pamphlets.