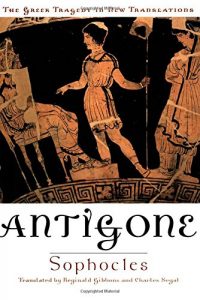 Sophocles’ Antigone is a quite interesting example of leadership. In books about leadership, the acts of leadership are generally described from the point of view of an assigned leader like a CEO, a general manager or a departmental manager. But in real life usually, leadership starts with a rebellion of a person who is not in the position of authority. The leader is a rising star who breaks the law or challenges the tradition or authority. So, in the play while the formal leader is Creon, the informal leader is Antigone. She is challenging the King’s Creon’s authority. She doesn’t want to obey Creon just because he is the king. Her name Antigone has two parts “anti” and “gone.” Anti meant against and opposed to and “gon” meant “corner, bend” like poly-gon. So, based on her name, Antigone’s role is opposing and challenging the order. She knows that her brother Eteocles should have left his position regarding the agreement about ruling the country one by one switching each year. Eteocles back-pedals from the agreement when his time come for surrendering the crown, and, in this case, Polyneices has no option but a war to take what he has right for. So, Antigone with a clear mind knows Polyneices has the right to be buried like his brother Eteocles after their death in the war. With a sense of justice, she stands for doing the right thing, and she is not afraid of confronting the King. She doesn’t try to hide in burying his brother; she is ready to live the consequences of her act. Because an honorable person-leader should do the right thing at the cost of death.

So, even the management textbooks do not give any place to the concept of “objection”, it can be considered as one of the important ingredients of leadership. Because leadership is about creating change. And change is only possible by changing the direction. The rivers follow their bed, but when they meet an obstacle-a direction changer, the river beds change. So, in organizations sometimes when there is a need for a change, and if that change does not come from the top, a middle-level manager or any employee can play the role of Antigone and start a fire by his/her opposition.

One thought on “Antigone / Sophocles”

Leave a Reply to school of applied science Cancel reply