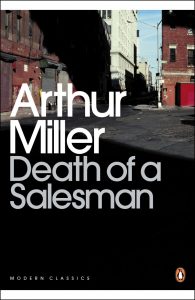 Death of a Salesman is an inspirational work that makes us think in several different ways; my personal preference is thinking about confronting reality and making adjustments. The members of the Loman family in the play, don’t accept the reality, and their life is like a fake film stage. What we see, hear, or read is beautiful, but when we check what is behind it, a disappointment waits for us. Linda and Willy do not have a happy marriage, but they pretend to be happy. Happy is working as a career man, but he is the assistant to assistant, he doesn’t have a real career success. He says that he has girlfriends, but in fact some of them are fiancées of his colleagues’ and some of them are prostitutes. Willy sells himself as a successful salesman, but he is hardly making a living. Biff tells that he is a salesman for Oliver, but he is just a shipping clerk. Moreover, they don’t tell only lies about themselves, but also, they believe in their lies. There are always illusions and manipulations of the reality in this family. They can’t change or adjust anything in their lives because of these illusions, and these illusions always drive them into troubles.

When a driver sees a big obstacle in his way, he has to stop and remove the obstacle or change his way. He needs to make an adjustment or change something to solve the problem. The members of Loman family do not realize the situations; they don’t make any change or adjustments to try to continue on their way and hit the wall. In business, successful companies and managers do not bury their heads in sand and act as there is no change in the market or society. When McDonald’s company realized people spend more money on coffee than hamburgers, they made an adjustment and opened McCafes. When Starbucks company admitted that people don’t want to drink hot coffee in summers, they started to serve iced latte and iced coffee in 1995. When BMW, Toyota, Honda realized that they will be no longer sell fossil fuel cars they started to design electric cars. The survival is only possible in admitting the reality and making adjustments and change. Otherwise, the people or companies will share the destiny of Willy Loman.

One thought on “Death of a Salesman / Arthur Miller”