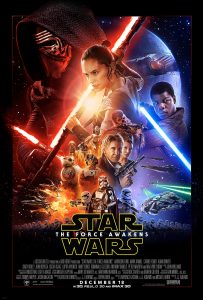 The Star Wars Saga has been a rich source of inspiration to extract life lessons. J.J. Abrams’ The Power Awakens also contains some unique life lessons.

The first lesson: The life is a constant struggle, so be prepared for the next challenge.

The stage of success is temporary and the forerunner of a new challenge. At the end of the Star Wars VI, Luke Skywalker kills the emperor and a period of peace and tranquility begins in the galaxy.

In time Luke vanishes and in his absence, the evil First Order rises from the ashes of the Empire. First Order is trying to control the galaxy as the Emperor once did. The peace again leaves its space to terror and war. There is an ongoing struggle in Star Wars. In real life, before we graduate from high school, we start to struggle to enter the university. Then when we graduate from the university and we start our job search adventure. When we get a job, usually a new battle starts: Finding the soul-mate and getting married to her or him, and the story goes on. So there is no permanent peace for human beings in this universe, nor in movies neither in real live. We have to be prepared for the next challenge when we reach a stage of success.

The second lesson: Always use your own judgment.

At the beginning of the story, the villain Kylo Ren orders to kill the innocent villagers in Jakku. Storm-trooper FN-2187 questions this order and decides not to give harm to the innocent people. He escapes from the First Order by using his commonsense. Following the example of storm-trooper, wherever we work in any environment, in any company, in any NGO, or in any hospital we have to use our own judgment to evaluate the operations of this institution. If the organization is doing harmful operations to the society or the world, we have to quit the organization. It is the way to live in dignity and coherence.

The third lesson: Helping is the way of making friends.

Rey is a scavenger young girl, and she is collecting scraps from an old spacecraft. She finds a robot called BB-8 and rescues it from another scavenger. FN-2187 helps pilot Poe Dameron-the master of BB-8 in escaping from the First Order. Poe starts to call FN-2187 as Finn because a human deserves a name. Then Finn helps Rey, Rey helps BB-8, Han Solo, and Chewbacca helps them

In the adventure of helping each other, Han Solo, Chewbacca, Rey and Finn befriend. If Rey continues to make money, instead of helping BB-8, she will spend her life as a scavenger. All the characters gain value and rise by helping each other. While helping other people, we make new friends and create an extended family.

The fourth lesson: A life spent for the sake of a purpose is more precious than a life spent to make money.

In Star Wars saga there are smugglers like Han Solo, Crime Lords like Jabba, and bounty hunters like Jango Fett, but those characters don’t have a specific value for the audience while these characters use their skills to make money. When Han Solo chooses to fight for the freedom of the galaxy, he is doing something meaningful instead of smuggling. People whose sole purpose is making money can buy sports cars, houses, and all the luxury stuff; but at the end, they fall into the void because possessions do not satisfy their souls. Happiness does not come with money; it comes to our lives as a result of serving for a significant purpose.

2 thoughts on “Lessons from Star Wars VII: The Power Awakens”