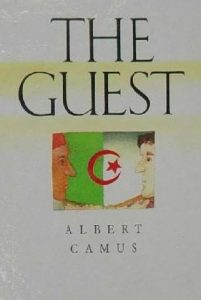 The Guest by Albert Camus is an inspiring story that makes us think about making a wise choice with a free mind. In the story Daru is an alienated teacher living in isolation on a plateau, teaching irrelevant and unnecessary French geography to Algerian students in North Africa in a war environment. This is one of the reasons of his alienation. One day he finds himself with a strange task of delivering a so-called criminal to a police station in two hours distance. By using the excuse of war, the gendarme forces teacher Daru to finish this strange task.
The mind of gendarme is a slave of the colonial social system, and he doesn’t have the ability to question the case and to understand its weirdness. When the gendarme leaves his school, he stays alone with the so-called criminal Arab. On that moment, Daru is at a special crossroad in his life. He knows that he has nothing to do with delivering an Arab to a police station in a colonized country, but if he doesn’t there might be consequences. “Daru” in Arabic meaning ‘the cure or medicine” represents a solution in this absurd world. Daru doesn’t act like the gendarme who is a slave of the colonial social system and prefers to stay neutral to the situation. He leaves the choice to the Arab to run away or to deliver himself to the police.

In the business world, so many managers act like the gendarme as the slaves of the written policies and bureaucracy and only ask their subordinates to follow the rules. There are a few managers like Daru, who realizes the situation and take action accordingly. Rarer than that are the managers who empower their subordinates to make decisions. At the end of the story, the ignorant looking Arab decides to deliver himself to the police and the reader is not sure if it is a wise decision.

To empower people to make a wise decision, they need to be educated. In my personal experience I have been working with assistants for 20 years and before empowering them, I motivate them to read, think, study and understand the fundamental concepts of a certain field. The knowledge and information free the minds and by a free mind, one can make a wise choice.

One thought on “The Guest / Albert Camus”