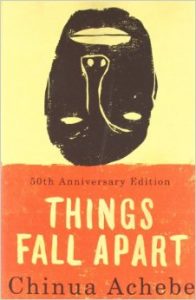 Things Fall Apart is a novel that makes us think about the change and adaptive difficulties that comes with it.

The protagonist of the novel Okonkwo passes two different change phases. The first phase of change in Okonkwo’s life is his exile in his wife’s village for seven years. When somebody moves to a new place, the whole context and life conditions change. Okonkwo loses all of his power in the new village because he is just a newbie in the village in comparison to his powerful position in his old village, and he has to play with the rules of the new village. He has to adapt to the new conditions by accepting the situation, and he is good at coping with the challenges of the new village. He knows the reasons, potential results and the length of stay in his new place, and knowing the framework of change helps him to adapt. When the future and the reasons for the change are clear for somebody, it is easier to show adaptive behavior. The second phase is the more difficult, returning home and seeing everything has changed. Okonkwo doesn’t understand the rationality behind the change in his village because he is not part of this change. His traditional view doesn’t help him to adapt to the change and finally he stays out of the new system. In the organizational world, there are similar situations; the people of the past do not understand the change, and when there is no mutual understanding about the need for the change, the traditional group resists to the change. In the movie “The Secret Life of Walter Mitty”, the situation at Life magazine illustrates a good example of the organizational change and its difficulties. The magazine is going to be published online only, and the employees have difficulty in accepting this new organization because change comes from outside; they are not part of the change, they didn’t start it, and they didn’t see it was coming; so they resisted it as in the case of Okonkwo.

Finally, we can say that an effective change is only possible when the rationality, the future results and the length of change are known by the affected people. They should be part of the change, or they become the part that is changed.

Leave a Reply to school of applied science Cancel reply