HomeHistory as Farce? Tarantino’s “Once upon a Time . . . in Hollywood” 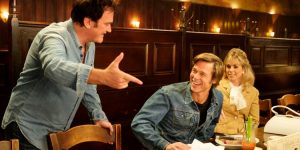 Once upon a Time . . . in Hollywood has been acclaimed as Tarantino’s valedictory love letter to Hollywood, his “Tinseltown valentine,” but also denounced as belonging to the “Manson-sploitation” genre. Invoking the “Once upon a Time in Nazi-Occupied France” intertitle of the first “chapter” of Inglourious Basterds as well as the titles of two Sergio Leone’s westerns, Tarantino’s new film reminds us that we are in the realm of make-believe, invention, and playful artistry. Anything can happen, including the “happily ever after” of the Hollywood dream factory. History can be rewritten, and what was first tragedy can be repeated and, at least at the movies, turned into farce.

“Once upon a time”: that’s how we signal a story. We are about to leave the here and now for the domain of the counterfactual, the great “What if?” There are, of course, variant forms. In Haiti, a storyteller will chant “Krik” and the audience responds with “Krak”—we are ready to hear your tale. And in Majorca, a storyteller will begin: “It was and it was not.” What you are about to hear is both true and untrue, a big old lie (that’s Zora Neale Hurston), but one that captures a higher truth about who we are. Or as Milan Kundera put it, in a meditation on painting delivered by one of his characters: “On the surface, an intelligible lie; underneath the unintelligible truth.”

But Quentin Tarantino and fairy tales? In Django Unchained, a film that seems far removed from the world of fairy tales, it is something of a surprise to discover a Sleeping Beauty subtext. Recall that Django’s wife is named Hildy, or Broomhilda, and that we first see her locked up in an underground chamber, her punishment for trying to run away. Naked, dehydrated, immobilized, and painfully vulnerable, Hildy lives up to the name given to her by German slaveholders. Recall Brunhilde’s punishment for disobeying her father Wotan: he narcotizes her with a “sleep-thorn” and surrounds her with a ring of fire, sealing her off from the world until a man who does not know fear will rescue her.

Inglourious Basterds is just as allusive in its use of fairy tales. After all, it opens with Beethoven background music and gives us a kick in the head with the cold-blooded shooting of a Jewish family, hiding underground from the Nazis, reminding us of the German genre that captures beauty and horror with unparalleled expressive intensity. And fairy-tale tropes appear in the film with chilling force, most prominently when Colonel Landa interrogates Bridget von Hammersmark and asks her to try on the incriminating shoe in his pocket. Presto, the shoe fits and the actress must “wear it,” Landa declares, after placing her foot in the shoe and then lunging on her to strangle her to death.

Perhaps those fairy-tale tropes are part of the nostalgic sensibility attributed to Tarantino, a filmmaker who is “profoundly and passionately conservative,” as A.O. Scott aptly put it, capturing elements of both self-indulgent regression and archival aspiration in the filmmaker’s imaginative universe. But there is more to Tarantino than that. Fairy tales are there to be rescripted, reinvented, and made new by each generation, and Tarantino does just that. They give us the tried and true, but they also stage the fears that haunt us in the here and now. The symbolic has always enabled us to navigate the real, and, since it is often larger than life and twice as unnatural, it can have a cathartic edge, the therapeutic power ascribed to symbolic stories by Bruno Bettelheim, when, in The Uses of Enchantment, he urged parents to read their children fairy tales, no matter how dark and unforgiving the violence in them.

The movies are, in many ways, our new folklore. Films tap into our collective desires and anxieties in the same way that stories once told around the fireside, in the fields, and in spinning rooms once did. They engage with all the social and cultural contradictions that are in our DNA and, they enable us to talk about those contradictions in ways that may not resolve them but at least rein in their toxic effects.

These days, in an age when we casually invoke the term “meta” to describe nearly every entertainment, we are also interested in what goes on behind the scenes as well as in the sensibilities of the filmmaker/auteur who can no longer be detached from what he directed. And here’s where even the darkness of Tarantino turns a shade darker, when we begin to wonder whether his cinematic violence is truly therapeutic and whether in the many public calculations of its cathartic value there may not also be a missing loss.

In a review of Tarantino’s film, Anthony Lane closes with concerns in an otherwise reverential viewing. Two things “freaked me out,” he confesses. “One was the sudden, insane burst of brutality that is inflicted by men upon women. And the other was the reaction of the people around me in the auditorium to that monstrosity. They laughed and clapped.” (Here, I’m reminded of gleeful reactions of audiences to the ending of Get Out, but that is another story.) Is this preposterous violence, so over-the-top vintage Tarantino that we double over with laughter rather than cringe in fear? Its hard not to notice that excessive force is trained largely on the female Manson acolytes, one of whom perishes after her face has been smashed into every surface and object available, the other of whom shrieks and screams while the fire from a flamethrower slowly consumes her flesh (it’s almost impossible not to think of the witch in another famous German fairy tale).

Tarantino is never shy about piling on, and you almost need a scorecard to keep track of the many noxious women in Once upon a Time . . . in Hollywood. There is the hectoring wife of the stuntman played by Brad Pitt, a woman right out of Hitchcock’s playbook who was more than likely (justifiably, as the snippet of her shrill outburst suggests) murdered by her long-suffering husband. There is the creepy precociousness of the “actor” (that’s what she calls herself), Julia Butters, whose soulless ambition turns an eight-year-old girl into a threat. And then there are the Manson minions, who eerily resemble Hitchcock’s avian killers in their power to silently and menacingly appear out of nowhere, vulture-like in the way they stare down their prey.

It took the #Metoo movement to reveal that what may appear to be standard-issue misogyny, culturally symptomatic rather than personally motivated, can be more than that. Recall Uma Thurman’s New York Times Op-ed, in which she revealed the abuse to which she was subjected while filming Kill Bill. Among the scenes was one in which she had a chain wrapped around her neck and appeared to be choking. Here’s Tarantino’s defense of how the scene was filmed, “I can act all strangle-ey, but if you want my face to get red and the tears to come to my eye, then you kind of need to choke me. I was the one on the other end of the chain and we kind of only did it for the close ups. And we pulled it off. Now that was her idea.” Was it? During the making of Inglourious Basterds, Tarantino decided that his hands, rather than Christoph Waltz’s, would be filmed in the strangling scene. “Look, I’ve got to strangle you,” he told Diane Kruger. “If it’s just a guy with his hands on your neck . . . it looks movie-ish. But you’re not going to get the blood vessels bulging, or the eyes filling with tears, and you’re not going to get the sense of panic that happens when your air is cut off.”

“I always believe in following the advice of the playwright Sardou,” Hitchcock long ago declared. “He said ‘Torture the women!” . . . the trouble today is that we don’t torture women enough.” Nowhere is Hitchcock’s sadism more evident than when seated in the director’s chair. While filming The Birds, Hitchock had no reservations about sacrificing Tippi Hedren’s personal safety to cinematic realism and “integrity.” The two-minute assault scene in that film required a full week of eight-hour days, days that left Tippi Hedren on the brink of emotional and physical collapse. “Miss Hedren was placed daily in a cage-like room . . . and two men . . . opened huge boxes of gulls which they threw directly at her, hour after hour. . . . Eight hours daily , for an entire week, she was subjected to this nerve-wracking experience. Birds flew at her, and birds were tied to her.” As she herself tells it, “Finally, one gull decided to perch on my eyelid, producing a deep gash and just missing my eyeball. I became hysterical.” In a final stroke of irony, on each day of shooting, representatives from the Humane Society were present to ensure that the birds were not mistreated.

Cinematic violence, in other words, inevitably seeps into the real world, in ways that are not always easy to calculate. Yet do we now want to police directors, demanding an end to imaginative work that may need what Shakespeare called violent delights to capture the attention of audiences and, more importantly, to remain authentic and true to its time and place?

Can we let Tarantino off the hook? After all, he may be doing nothing more than offering a meditation on how the success of Hollywood films is fueled by mayhem and violence. Or he may be delivering a message on how stuntmen take all the risks and save the day while actors lounge in the pool. Is he mocking the way we cheer on the tough guy who will snuff out the killers (using their tactics)? Or is he revealing how a violent killing spree can be turned into just another day at the office, with the fading TV star played by Leonardo DiCaprio casually and happily accepting an invitation to socialize with Sharon Tate and her friends as charred and battered corpses are driven off in ambulances? Tarantino may be giving us the fairy tale we deserve, even as he mischievously critiques the medium in which he operates and the illusions in which it traffics. Reminding us of our desperate need for scapegoats, he shows us what hypocrites we are when we preach the gospel of kindness and empathy to our children.

Like every good fairy tale, Once upon a Time . . . in Hollywood gets us thinking more and thinking harder about who we are and about why violence in the movies is, as Tarantino once put it, “cool,” even when real-life violence is “one of the worst aspects of America.” What does it say about us when we cheer on the stuntman smashing faces into walls and the Hollywood star extinguishing life with his flamethrower and then recoil in horror when we wake up to headlines about another shooting spree in America?