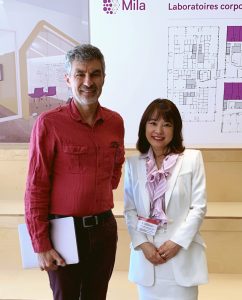 Prof. Yoshua Bengio at the MILA

On June 7th, 2019 at the MILA (Montreal Institute for Learning Algorithms) in Montreal, Canada, I conducted my interview with Professor Yoshua Bengio, who is one of the pioneers of AI (Artificial Intelligence).  He is well-known as the “father of AI” for his great contribution to developing so-called deep learning.  He has received the 2018 ACM A.M. Turing Award with Geoffrey Hinton and Yann LeCun for major breakthroughs in AI.

In my interview, I asked him about the possibilities of AGI (Artificial General Intelligence), biased data, people’s concerns about GAFA (Google, Amazon, Facebook, Apple) and China, the opportunities and risks of AI and the future of AI.  All these questions are based on my previous experiences in the University of Cambridge as well as many international summits and conferences on AI I have been invited to recently.

Bengio is also noteworthy because he chooses to remain as an academic, staying at the University of Montreal as head of the MILA, while other AI leaders such as Geoffrey Hinton have left academia and now work for Google.  Bengio continues to contribute to teaching students as well as engaging with local communities. He believes the education of future generations and people’s engagement with AI is crucial for the creation of a better society including AI. This is because he is aware of not only the opportunities but also the risks of AI.  As he owns his startup, so-called Element AI, he is instrumental in building a bridge between academia and the business world.

This is my interview with Yoshua.

The Road to AGI

YB             I’m positive that we can build machines as intelligent as humans, but completely general intelligence is a different story. I’m not positive as to how humans might use it because we’re not very wise.

TT             I spent some time in Cambridge, and some scholars, for example Professor John Daugman, the head of Artificial Intelligence Group at the University of Cambridge, said that AGI is an illusion created by science fiction because he said that we don’t even understand a single neuron so how can we create AGI?

YB             Sure. Having worked for decades on AI and machine learning I feel strongly that we have made very substantial progress, and in particular we have uncovered some principles, which today allow us to build very powerful systems. I also recognise that there’s a long way towards human level AI, and I don’t know how long it’s going to take. So I didn’t say we’ll find human level AI in five years, or ten years or 50 years. I don’t know how much time it’s going to take, but the human brain is a machine. It’s a very complex one and we don’t fully understand it, but there’s no reason to believe that we won’t be able to figure out those principles.

TT              Nobody knows. Yes, of course. When I met Professor Sheldon Lee Glashow, a Nobel Prize winning American theoretical physicist, he told us that we won’t have AGI. Or even if we have it, it’d be very far away.

YB             It’s impossible to know these things. There’s a beautiful analogy that I heard my friend Yann LeCun mention first. As a researcher, our progress is like climbing a mountain and as we approach the peak of that mountain we realise there’s some other mountains behind.

TT              I see.  But some people also say that we need a different breakthrough to create AGI. We need a kind of paradigm shift from our current approach.  Do you think that you can see the road to reach if you keep on with deep learning? So this is a right road?

YB             We have understood as I said some very important principles through our work on deep learning and I believe those principles are here to stay, but we need additional advances that are going to be combined with things we have already figured out. I think deep learning is here to stay, but as is, it’s obviously not sufficient to do, for example, higher-level cognition that humans are doing. We’ve made a lot of progress on what psychologists call System 1 cognition, which is everything to do with intuitive tasks. Here is an example of what we’ve discovered, in fact one of the central ideas in deep learning: the notion of distributed representation. I’m very, very sure that this notion will stay because it’s so powerful.

Toshie Takahashi is Professor in the School of Culture, Media and Society, as well as the Institute for Al and Robotics,Waseda University, Tokyo. She was the former faculty Associate at the Harvard Berkman Klein Center for Internet & Society. She has held visiting appointments at the University of Oxford and the University of Cambridge as well as Columbia University. She conducts cross-cultural and trans-disciplinary research on the social impact of robots as well as the potential of AI for Social Good. 【早稲田大学文学学術院教授。元ハーバード大学バークマンクライン研究所ファカルティ・アソシエイト。現在、人工知能の社会的インパクトやロボットの利活用などについて、ハーバード大学やケンブリッジ大学と国際共同研究を行っている。東京オリンピック・パラリンピック競技大会組織委員会テクノロジー諮問委員会委員。】
View all posts by Toshie Takahashi →
This entry was posted in AGI, AI, biased data, cross-disciplinary approach, Culture and Communication, deep learning, education, future society, opportunities, risks, Robot. Bookmark the permalink.
Protected by Akismet • Blog with WordPress