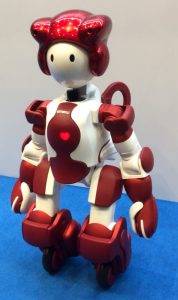 Ministry of Internal Affairs and Communications of Japan have promoted “Global communication projects” (sophistication of multi-language voice translation system) in their “Smart Japan ICT strategy”. This is the first project (out of nine scientific and technological projects) for Tokyo Olympic 2020 by Japanese government.

VoiceTra is a multi-language voice translation system which has been developed since1986. They began to use AI to analyse mass amounts of web pages and social media from diversified perspectives over 10 years ago.

They also create ASTREC, which is a team of Japanese companies to bring VoiceTra into society in many different scenes such as public transportation, hospitals, taxi and so on. They have received many feedbacks on VoiceTra from users and this feedback loop among users and scientists and AI has been improving VoiceTra dramatically. 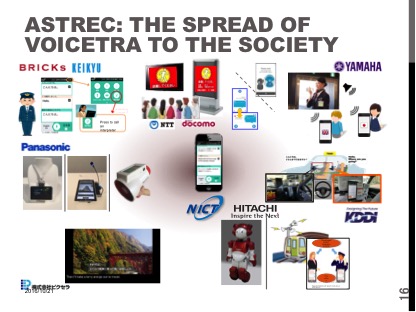 I have been interviewing top computer scientists and Neuroscientists who are specialists of AI in Japan. For example, Director Torisawa who creates Wisdom X from NICT, and Professor Yanagida who is one of the best neuroscientists in Japan from CiNet. 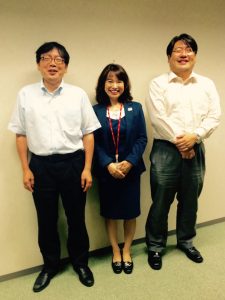 Dr. Yutaka Kidawara & Dr. Kentaro Torisawa about the future possibilities of Multilingual translation and AI toward the 2020 Tokyo Olympic @NICT  2016.9.28

I have interviewed computer scientists from Yamaha, Panasonic, Fujitsu, Hitachi and KDDI in ASTREC. To take one example, I learned KDDI who develops VoiceTra in taxi don’t only provide their gadget to local taxi drivers in rural area in Shimane prefecture, but also they teach how to communicate with foreigners in general. They try to expand their service to local shops and restaurants with local cable company which KDDI owns. In doing so, they will teach local people, who have never talked with foreigners before, not only how to use VoiceTra but also intercultural communication with foreigners in general. 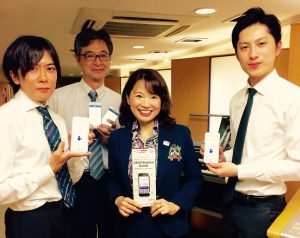