What is the internet?

During our second seminar of the semester, we spent some time discussing mainframes (a.k.a. “big irons”). To be honest, I was quite confused during this part of the seminar and for that reason have decided to use this blog post as an opportunity to research and explain what, in fact, a mainframe actually is. 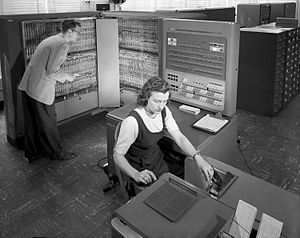 According to the IBM (i.e. International Business Machines) knowledge center, the term “mainframe” used to refer only to an early physical computer. These early machines used to take up as much space as a room and required their own air conditioning systems. As opposed to supercomputers, which are meant to process large quantities of data and are ideal for things like medical research and weather forecasting, mainframes are designed to process high volumes of simpler transactions. Nowadays, though, “mainframe” can also refer to  “a style of operation, applications, and operating system facilities” (“What is a Mainframe?”). From what I gather, this means that systems that serve similar purposes to the original, huge mainframe computers can also be referred to as mainframes; that is, the same operations that used to require mammoth IBM operating systems can now be executed on smaller devices.

The 2015 IBM z13 mainframe. It was designed specifically with supporting secure transactions over mobile apps in mind. As you can see, they’re still very large–about the size of a refrigerator. https://www.wired.com/2015/01/z13-mainfr…

But what are these operations, exactly? Today, mainframes are often used to process high volumes of transactions, especially ones that must be done securely. Mainframes are extremely reliable, as they have many built-in redundancies and are designed to support a lot of I/O (input/output); specifically, the modern IBM mainframe can have upwards of 160 I/O cards. Mainframes are used by most major banks in the United States, retailers, and airline ticketing systems. And you’ve likely used a mainframe yourself, whether or not you knew it! When you withdraw money from an ATM, you use a mainframe to access your bank account. It’s the same if you are checking your account through a web browser like Safari or Google Chrome. Other major uses for mainframes include managing large amounts (e.g. terabytes) of data in databases and supporting thousands of users and apps utilizing certain resources simultaneously (“Who uses mainframes”).

Check out the video from Techquickie below for more details!

“What is a Mainframe? It’s a Style of Computing.” IBM Knowledge Center, IBM, 2010. <www.ibm.com/support/knowledgecenter/zosbasics/com.ibm.zos.zmainframe/zconc_whatismainframe.htm>

“Who Uses Mainframes and Why Do They Do It?” IBM Knowledge Center, IBM, 2010. <www.ibm.com/support/knowledgecenter/zosbasics/com.ibm.zos.zmainframe/zconc_whousesmf.htm>

After reading the first couple chapters of Where Wizards Stay Up Late and our first discussion as a group on Monday, I came away with a great appreciation for the power of competition in furthering human progress. I recognize that this is no novel idea; in terms of economics, we know that free markets foster innovation and lower prices. A centralized economy with a government monopoly on goods and services is inefficient and ineffective; the fact that the Unites States prevailed in the Cold War while the Soviet Union’s communist system did not is classic evidence of this. And indeed, the importance of competition applies beyond economics and extends to influencing human psychology to drive progress. Nonetheless, I was struck by observing the specific role competition played in the creation of the internet, something that is now an integral part of day-to-day life in much of the world.

I found it fascinating to read about how the competition that drove progress when it comes to the early foundation of the internet was driven by a social reaction to the Soviet Union’s successful launching of the satellite Sputnik. Sure, Wizards makes clear that despite the common misconception that the “ARPANET had been built to protect national security in the face of a nuclear attack” (1), it was in fact built with the goal of connecting computers across the US so that scientists could share resources and data. So I do not suggest that the early foundations of the internet were a direct response to Sputnik (although the Space Race was)  or a Russian nuclear threat. Rather, Sputnik shifted American culture further in favor of science, “causing a new emphasis on science in schools” (8), and increased government support for scientific groups that weren’t even specifically designated for national defense–like ARPA.

As we discussed in class, competition was likely a large factor too in the motivation behind the surprising partnership between Amazon’s digital assistant, Alexa, and Microsoft’s equivalent, Cortana. Though no one knows exactly how the two will be integrated (besides that it will be a  complicated process), we noted that the announcement gave the two companies lots of press and that the partnership is aimed at competing with Apple’s Siri. In response to some viable competition, Apple will likely continue to develop and fine-tune Siri, demonstrating again the power of competition in driving people to innovate, create, and improve.

Hafner, Katie, and Matthew Lyon. Where Wizards Stay up Late: the Origins of the Internet. Simon & Schuster Paperbacks, 1996.