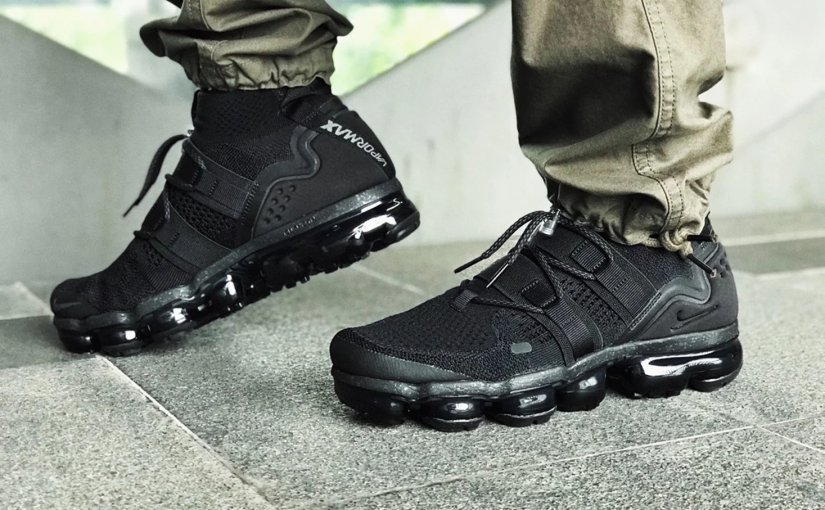 A while back someone at the gym stole my vaporflys and I was so bummed out I didn’t even want to go to the gym. Since not going to the gym was bad for my health I figured I’d solve this problem as quick as possible by walking into the Nike store and picking out whatever caught my eye. By coincidence I found the Nike Air VaporMax Utility Triple Black. They were listed on the Nike website as running shoes though at over $200 retail I think they were targeted a bit differently than trainers. I’d say these shoes were primarily for the techwear fashion enthusiasts but you know they had a nice new midsole and others in the line were clearly meant for running so I bought them… to run in. Not like casual running, these were my only training shoes for a while. 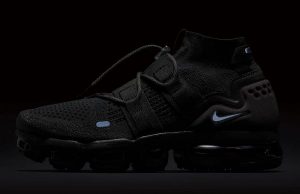 I mainly liked how the shoes fit in with my athletic outfits. I went to the gym on campus I wouldn’t have to bring a set of training shoes and a set of nice shoes for class. I’d love to style these with an acronym cp4-ws cape one day but that’s out of my budget range for now. My main complaint is the squeak. My friend commented “you’re not gonna sneak up on anyone with those shoes”. The vapormax soles squeak, especially on that you commonly find at schools and hospitals. Other reviewers said this went away but after years of ownership I can confidently say the squeak does not go away.

Enough of that though, I said I trained in them and I did. How were they to run in? It was fine. It felt like a high unstable platform at times. The flyknit held my foot well and I didn’t feel like I needed laces. That fastener lace they had on there does nothing. However, some days I’d get roped into playing sports with them on and this is where the real criticism lies, the shoe cannot handle any horizontal force. I think I was playing soccer and needed to change direction quickly. The shoe basically rolled around my foot like a sock so that the sole was completely on the side and I was stepping on only flyknit. The shoe survived that, more than once too.

After a years of use the shoe has faded and the flyknit has a small hole on the high top collar from me pulling the shoe on. Make sure to use the straps to pull flyknit shoes on or you’ll repeat my mistake.

Shoe was fashionable for everyday wear, acceptable to run in, and terrible for sports.