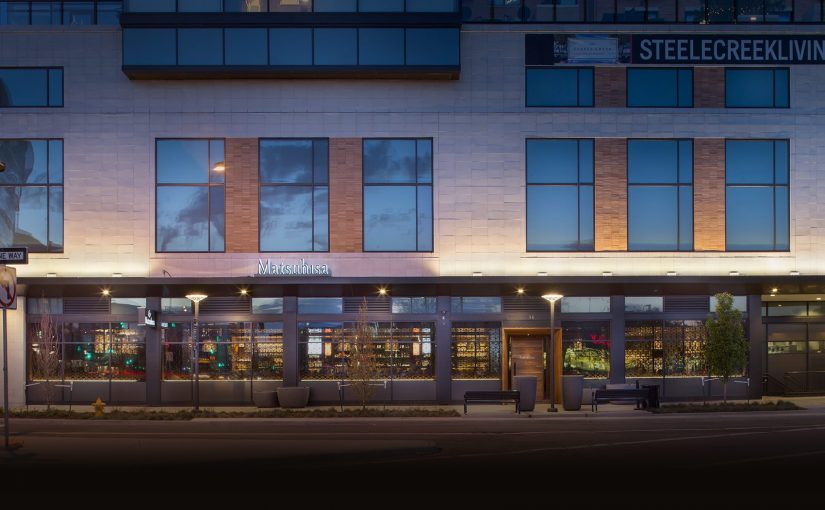 Everyone knows about famous sushi restaurant Nobu, a favorite of Hollywood celebrities and Roxanne. But few know about its sister restaurant, Matsuhisa. For those of you that haven’t made the connection, Chef Nobu’s full name is Nobu Matsuhisa and he’s given his last name to a few restaurants in the Colorado Rockies (there’s also one in Beverly Hills but it has its own website for some reason).

There are currently three Matsuhisa restaurants. One in Denver, Aspen, and Vail. Matsuhisa is basically a Nobu for your annual ski trip. Nobu’s are often found in affluent areas and Matsuhisas make no exception, Aspen and Vail are two of the nicest ski resorts in the country.

This past weekend I was skiing in Aspen, the restaurant is easy to spot from the street in downtown. The Aspen location looked pretty small, understandable because space in Aspen is very limited (Moncler even had to send a runner from their stock room three blocks away when we asked for different sizing). The Denver location was roomy, occupying the bottom floor of a building in downtown as seen in the featured image. I’ve seen pictures of the Vail location and that one looks the nicest to me. I’ll be going to Vail in a few weeks and hopefully will get it to check it out. Anyways back to Denver…

Denver is currently not allowing dine in because of COVID-19 but my friend and I stepped into their location to order. The door was consistent with the large wood designs I’ve seen at Nobus before and the interior looked upscale as well. The menu looked the same as Nobu’s but I only eat nigiri and waygu so I mainly payed attention to those sections. Matsuhisa Denver was really only missing the ocean views typical of the Nobus back home.

The host was polite and immediately came to help us. After we ordered he showed us a seat in the waiting area and offered us water. The food was nicely packaged making it look like we just finished shopping at a boutique. They even included an envelope with a letter thanking us for our patronage. The package included a few complementary cookies and more than enough soy sauce, both kinds, regular and low sodium.

I estimate that Matsuhisa is slightly cheaper than Nobu. Maybe 20% cheaper. 8 pieces of nigiri and a roll cost me about $70 before tax and tip. Comparing the same item on the menu, Salmon nigiri is $5 per piece at Matsuhisa Denver and $7 per piece at Nobu Malibu making Matsuhisa basically 30% off Nobu. Of course a restaurant on the Malibu coast is probably going to have more overhead costs. I know for a fact that Nobu prices vary depending on the location. Perhaps I’ll make a blog post later on the cheapest place to get Nobu; though I think I’ve already answered that, the cheapest place to get Nobu is at Matsuhisa.

I haven’t been brave enough to try other sushi places in Denver since it’s far from the water but I very much enjoyed the food at Matsuhisa. I think I’ll be visiting Matsuhisa more often because it’s basically a cheaper Nobu. I guess whether you’re wintering in the Rockies or you’re staying in Denver like me, Matsuhisa does the job of satiating that Nobu craving for high end sushi.

5 thoughts on “Nobu vs Matsuhisa”