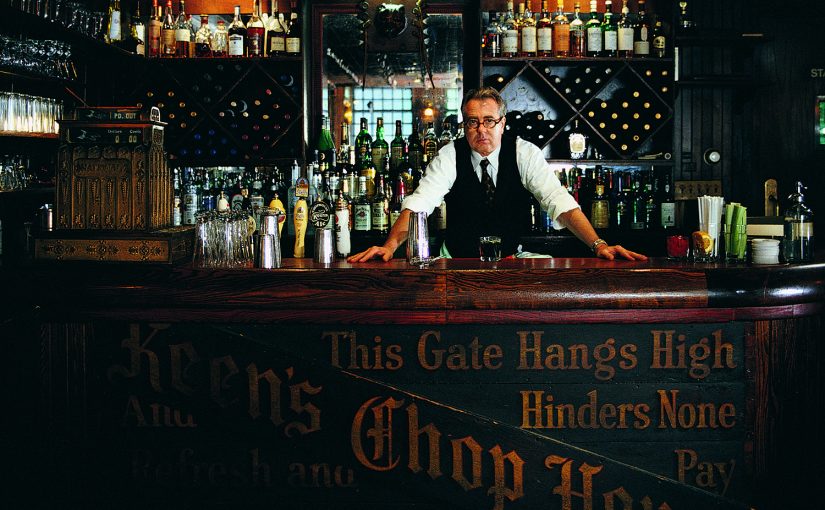 I was staying in Manhattan for the weekend and I’d been craving steak for a month. Steak is my favorite food next to sushi and on special occasion I often visit Maestros. It was my family’s restaurant of choice for many when I was younger, we often secured a private room for parties. I’m also fond of Ruth Chris and Gallagher’s, all amazing. In my search for Peter Luger I found that it’s actually across the bridge, a bit too far for me so I made a reservation at Keens.

We arrived at noon after finishing a few mimosas over a rowdy Sunday brunch. The restaurant was dim and the host was polite despite my friend and I being underdressed in our rain coats and jeans. The host of course was in a tasteful black jacket and bowtie. The restaurant seemed empty at lunch (COVID era) and there were plenty of open tables even though only the downstairs portion of the restaurant is open for lunch. Soft music played in the background; our waiter asked us what was for lunch in a hush voice. I ordered the mutton chop and my friend ordered the filet mignon.

The first thing I noticed about the mutton was its size, it’s a big cut. Though I slowly realized that there’s a lot of bone taking up that space so I was able to finish it, barely. I’ve never had mutton before, but I enjoyed it a lot. There’s some meat hanging off the side of the cut that has a really strong flavor. The meat is a little bit awkward to cut around the bone. It’s probably not going to replace my love for steak but I could see myself getting this whenever I’m in the area. If you haven’t tried mutton chop, I’ve heard this is the place to try it.

The fries were top notch: salty with amazing crispy texture and served at a perfect temperature. My friend commented his steak was the best he ever had. Though take that with a grain of salt because he’s an anti-foodie, adverse to trying new foods, he doesn’t quite like visiting a large variety of restaurants.

After the meal, the waiter handed us off to the host who showed us the playbill President Lincoln was holding when he was shot, blood splatter, brain matter, and all. Keens has a history related to theater, it’s on the back of their menu. Also of interest was Babe Ruth, Pres Roosevelt, Pres Hoover, and General Douglas MacArthur’s pipes in a case. Some more modern pipe owner’s names were by the door. I was hoping to get my pipe up somewhere since I saw that they sold them, there was one missing above my table but I imagine the club is pretty exclusive. Lastly, I looked for Albert Einstein’s pipe but the host told me it was stolen. Whoever has Albert Einstein’s pipe comment below, I’d pay a pretty penny for it.

An absolutely hilarious superstition I read about stems from family members breaking the pipe of the deceased so that it could no longer be used. In a sort of reversal when a pipe falls from the ceiling the myth implies that a member has died.

I wish Michael Jordan’s steakhouse was still open in Grand Central but next on the list is Peter Luger!