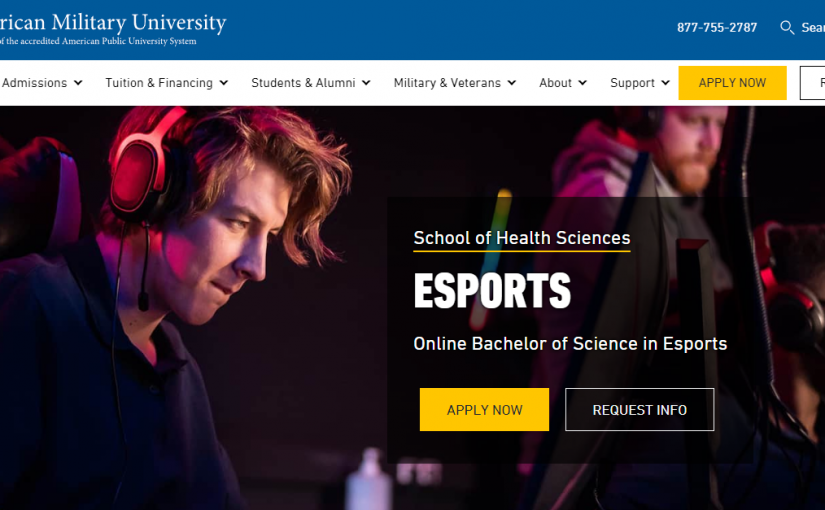 Okay I’ll admit, the title is a bit misleading: the degree comes from American Military University, a private university where most military tuition assistance is spent. Though one could choose almost any program to apply tuition assistance, AMU gives military members a discount making their degrees cost exactly the amount military tuition provides. Because of this, over half of the military members in university attended AMU, at least this was the case when I worked at an Air Force Education Center in 2020.

And AMU has rolled out it’s most exciting degree yet, a Bachelors Degree in Esports. The military values education in its promotion and commissioning boards. Though exactly what degree you get often doesn’t matter, it just checks a box. I can think of multiple pilots with degrees in political science and space officers with degrees in sociology. So if you need a degree, any degree, why not get one that’s free with tuition assistance and in a subject area you’re passionate about? I’ve already got my degrees but in another life I would’ve loved to have done this program.

The military has a long history of using Esports and videogames for recruitment efforts. We have team jerseys and internal tournaments to select our pro teams. High level players can be paid to train and attend Esports tournaments through the same program as military Olympians. The Space Force, the smallest military branch by far, won the 2021 interservice Call of Duty tournament, the CODE bowl, then launched the trophy into space (kinda, it probably fell short of the Karman line). Semper Supra!