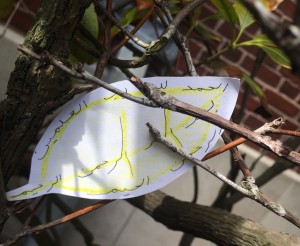 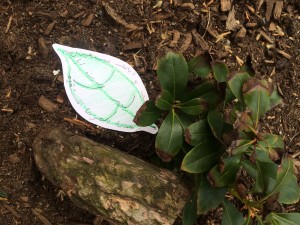 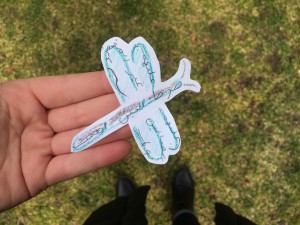 This piece draws from week 2, “The Qur’an, God’s Word as Sacred Design, and Calligraphy.” The photos above depict a calligraphic representation of Sura al-Fatiha, the opening sura of the Qur’an, using nature-based designs.

I chose to use calligraphy for this project given the importance of calligraphy in Islamic cultures. When recited, the sound of the Qur’an is exceptionally moving, and the beauty of the language is cited as evidence of its sacredness. Therefore, the written version of the Qur’an must also capture this beauty, and a major mechanism through which this is accomplished is Arabic calligraphy.

The importance of the written Qur’an is also emphasized in the original story of the revelation, and the acts of reading and recitation are closely related, as discussed by Khatibi and Sijelmassi:

Recall the first words revealed to the Prophet Muhammad, “Read, recite.” Does not the word Qur’an also mean the act of reading and recitation? Read the world and the heavens as a table of signs. You are first and foremost a reader, then a believer. (Khatibi and Sijelmassi, Splendor of Islamic Calligraphy)

The above quote also references the idea of signs, or ayat, as evidence of God. The Qur’an mentions that the existence God can be recognized or experienced through signs, some of which may be found in nature. The face of God is said to be reflected in nature and in the world; therefore I chose to create calligraphic representations of natural things–leaves and a dragonfly–to represent the signs of God that appear in nature.

Specifically, I used a dragonfly in the final image because of their agility and beauty; much like the signs of God, they can be difficult to spot, but once noticed they are often regarded as beautiful. I choose to photograph the final calligram on a human hand to emphasize that the signs are accessible to human understanding. By understanding the Qur’an, humans are able to remember (dhikr) God and can see His signs in the world around them.