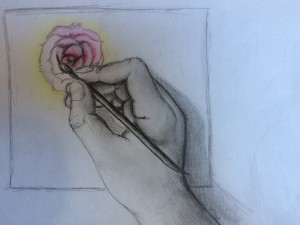 This drawing pulls from week 4, “Prophet Muhammad as Paradigm.” In the above piece of artwork, the Prophet Muhammad (pbuh) is symbolized as a rose, which a common representation in Islam, as described in Ghazal 19 by Hafiz and in a poem by Muhammad Iqbal:

We are like a rose with a hundred petals with one fragrance: He is the soul, he is the one. (Muhammad Iqbal, Asrar-i khudi)

Also, there is a halo of light around the rose, which connects to the theme of prophethood as divine light. For example, the Qur’an described Muhammad as light (“nur”) from God (5:15) and a radiant lamp (“siraj munir”) (33:46)

Week 4 focuses in large part on the love that Muslims hold for the Prophet. In the above drawing, a Muslim artist is depicted as lovingly painting the rose, showing the devotion of Muslims to the Prophet. Secondarily, this also shows the importance of Islamic art as a means of expressing this love and religious devotion more generally.

There is more to the drawing than love of the Prophet, however. In almost every context, Muhammad is seen as a role model, and Muslims throughout the world seem to imitate his beautifully righteous life:

Verily in the messenger of God you have a beautiful model for everyone who hopes for God and the Last Judgment and often remembers God (Qur’an 33:21).

The final notable feature of this piece of artwork is that the rose in the artist’s painting is unfinished. This symbolizes the ongoing nature of followers’ relationships with the Prophet. The process of imitation is a lifelong journey for many Muslims, and so this artist is in the midst of his own spiritual quest to imitate the Prophet.