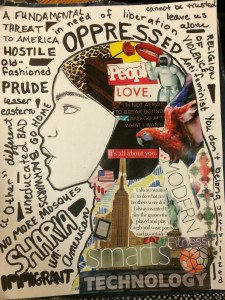 This piece draws from week 10 and highlights the complexities of Muslim women and feminism in an Islamic context. The piece is meant to highlight the difference between the external perspectives and stereotypes about hijabis and the internal meaning that the hijab has for each woman who choses to wear it.

The background of the piece contains a series of words, written in black, which represent the stereotypes often associated with Islam and America and with Muslim women in a Western context. The comments range from the political–“sharia” and “no more mosques”–to the condescending–“in need of liberation”–to the Islamophobic. All of these insults were either alluded to in class or are common in the media. These background is black-and-white to represent the lack of nuance and complex understanding that is present in these stereotypes.

By contrast, the actual hijab is a combination of words, quotes, images, and symbols and is full of color. This is to symbolize the depth within Muslim women (and, indeed, within all humans) and to explore the full range of what the hijab means to those who wear it.

Many of the images and words in the hijab are offered in direct contrast to the stereotypes. In response to the “uneducated” stereotype, there are books and representations of intelligence; in response to the “backwards” and “uncivilized” stereotypes, there are depictions of technology; in response to the “un-American” stereotype, there is the American flag, Statue of Liberty, and New York skyline. The lips and jewels symbolize that hijabis can, in fact, be classically feminine, while the soccer ball shows that the veil need not keep women from being athletes. The leopard skin represents strength, while the parrot represents freedom and vibrance.

Importantly, near the middle of the hijab, there is a black patch. This is to symbolize the fact that some Muslim women do legitimately feel oppressed by the hijab, whether they are forced to wear it or choose to wear it for their own reasons. This black in integrated with the rest of the hijab, though, to show that these negative feelings are not always experienced in isolation, and that they may be only a part of the complex emotions that hijabis feel towards the veil.

However, there also exists within the piece more classical and positive references to religion. The rose near the top symbolizes the prophet. Additionally, the eyes of the woman are not looking at the surrounding stereotypes; rather, she is looking up, symbolizing her relationship with and dedication to Allah.

The main point of this piece, though, is to emphasize the diversity of experiences and perspectives of hijabis and to validate all of their experiences. As captured by the central quote–“It’s all about you”–the choice to wear a hijab, as well as the associated reasons and experiences, are fundamentally individual in nature.