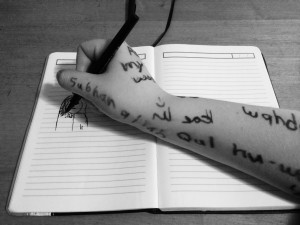 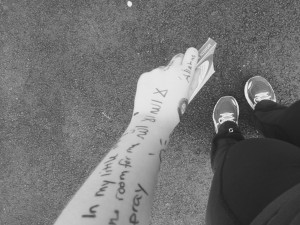 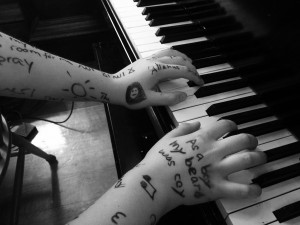 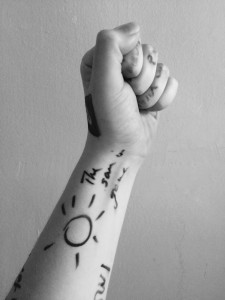 This piece, “Resistance,” draws mainly on the themes of week 12, which discuss the use of Islamic art and literature to empower artists and fight against oppression. Each of the four photographs is taken in black and white, mirroring the style of graphic art and cartoon used in Persepolis.

The first three pictures represent different ways of engaging with Islamic art. The first picture depicts a hand, holding a pen, engaged in the creation of graphic art. The second photo shows the hand holding a book (specifically, A Reluctant Fundamentalist), representing the consumption of art in the form of literature. The third photo shows two hands on a piano, engaged in the expression of religion through music.

The three artistic forms described above–graphic art, literature, and music–are the three main forms of resistance art that we discussed in class. Graphic art was used not only as a form of critique, as in Persepolis, but also as a tool of revolution and a motivator in times of war, as in Iran:

“Never in the history of propaganda have the graphic arts systematically played such an important role as they did in Iran in the years 1980-88 . . . . The battle was waged not only in the trenches at the front but also in the streets and alleys of Iranian towns and villages.” (Chelkowski, The Art of Revolution)

Literature was (and is) also a form is societal critique, as exemplified by the short story Sultana’s Dream. Finally, music, from hip hop to jazz, remains relevant in the Islamic tradition, both in the context of Sufi mysticism and as a means of pushing back against oppression and injustice.

The key component of all of these pieces of art, though, is that the art is also expressed on the skin of the artist. The hands and arms are covered in body paint, bearing the words of hip-hop songs, musical notes, graphic illustration, poetry, and lyrics, in English, Arabic, and Urdu. This shows that engagement with Islamic art is, for many, not simply a passive process. In the absorption and creation of art, and in the action of social critique, the art fundamentally affects the artist, becoming a part of their being.

This final step–the internalization of artistic messages–seems to me to be a key for resistance through art. Because art has this special power to deeply affect and move its creators and consumers, Islamic art has been an important tool for resistance, as symbolized by the fisted hand in the final image.