On my best and worst days, I listen to stories. I hear the stories of incredibly brave, often scarred, sometimes shy everyday heroes — people forced to flee. Mothers, teachers, children, brothers, dreamers, scientists, athletes, artists, survivors. I’ve heard from all of them, across five different continents over nearly three decades, most working for UNHCR, the UN Refugee Agency.

The people I’ve met are just like you and me; they have dreams and full lives, and they just want their families to be happy and healthy. They are also like June, Emily, Rita and Moira from The Handmaid’s Tale, all refugees forced to seek safety. And while these women live in the fictionalized world of Gilead, their stories and experiences are all too real. They could easily be four of the nearly 80 million displaced people who risk everything to save themselves and their families from the dangers of life at home.

I’ve listened to these stories of refugees while sipping countless tiny cups of extremely strong coffee across the Balkans, sitting in a tiny patch of shade in 52°C/125°F heat that made me feel as dry as paper in Eritrea, and even while bunkered in a room hearing gunfire outside in the Democratic Republic of Congo. Some of these stories I’ve written down or shared with others, while most I carry silently within me. Even decades later, I recall minute details of the faces of those whose stories have become part of my own story. I find myself wondering how they are, where they are, if they’ve reached their big-small dreams of opening their own bakery, learning English, sending their children to university, and the most common dream of all: living a life without fear, in safety, and peace

I fell into humanitarian work almost accidentally, but the day I stepped off a cavernous, double-rotored NATO helicopter in Bosnia in 1995, I knew I would dedicate myself to this work. It was July 11th and a mere 100km away, over 8,000 boys and men were being massacred in Srebrenica. I was at the Tuzla airbase as thousands of women and children arrived, dazed and traumatized. I did not see a single adult male, nor many teenaged boys, and saw only a few elderly men among the sea of families who had arrived. The wailing of the women was so pervasive and omnipresent, it was a physical presence that hung all around us. As I write, I can hear it still all these years later, my stomach knotting up as I go back to that hot summer day. 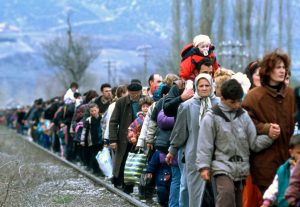 I went on to work in Rwanda, the Democratic Republic of Congo, Burundi, Tanzania, Kosovo, and Eritrea, living and working in these dangerous, beautiful, complicated countries throughout conflict and upheaval. I also went on field visits to the Middle East, Asia, and the Americas. Everywhere I saw first-hand the tragedies and challenges of responding to complex emergencies where millions of forcibly displaced people needed life-saving assistance, international protection, and access to human rights, often in exceptionally harsh, difficult conditions. 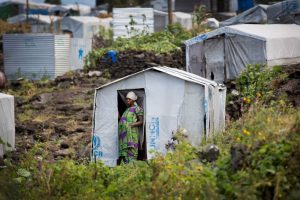 I cannot imagine the terror of trying to survive, trying to feed your children and maintain some sense of security and comfort for them as a mother when you yourself were perpetually scared, perhaps even more terrified as a parent. So many families saw their loved ones assaulted, raped, killed, their homes burned, their lives destroyed. Many mothers were unable to keep their children safe or healthy. So it seemed particularly cruel that this mother had kept her children safe, kept them alive until they all but reached the shores of Bangladesh.

She asked if I had children. I nodded that I had two children at home. She recounted that as they neared the shore a huge wave capsized the boat and there was mayhem. Everyone plunged into the water, some flailing under the overturned boat. The water was chest-high, so she, her husband and oldest daughter could stand but the waves were rough and kept knocking everyone over. I will never forget the despair in her eyes as she whispered, “I only have two arms so I grabbed the two children nearest me.” She struggled to get to shore and it was only when they finally stumbled onto the beach that she realized her youngest daughter was missing.

The grief mixed with guilt that was in her eyes was heartbreaking. I didn’t speak her language and we were as different as could be but what we shared in common at that moment was even greater. We were both mothers who wanted the same thing — happy, healthy children, with the chance to grow up and have their own children one day. As we held hands and locked eyes, I knew all I could do was be there with her, witness her pain, share her grief, as well as her hope.

We can learn more about displacement, its root causes, and how to improve our response and support to people forced to flee. (Follow @refugees on social media to learn the latest or go to UNHCR’s data portal for all the data.)

· We can speak out against racism, persecution, and injustice and for solidarity, empathy, and kindness. We can use our social media for good to express our support for human rights, people forced to flee, and organizations like UNHCR working around the world to support and protect stateless and displaced people everywhere.

· We can be allies and activists by organizing or supporting events, hosting a World Refugee Day party on June 20th, a community potluck, inviting refugee speakers to schools, places of worship, or book clubs.

· We can volunteer with local or international organizations, locally or abroad.

· We can use our voices and our wallets for social change. Support local refugee businesses and companies that support humanitarian causes or employ refugees locally. And if it’s possible, donate to your favorite organization.