Week 12: Literature and Arts as Critique and Resistance

Even though Saudi Arabia, Pakistan, and Iran declare themselves as “Islamic States,” the term is elusive because these countries differ in their interpretations of what an Islamic State is. In a lecture, Professor Asani defined Islamists as groups that use Islam as a political ideology usually for a nation-state. They conceive Islam as an a-historical monolith. They implement and institutionalize one interpretation of the Qur’an. The Qur’an, however, is not a political text; it teaches morals and values, not how to create an Islamic State. Even the “state” that the Prophet Muhammad and Sunni Caliphs led were not nation-states. They unified people of diverse cultural, linguistic, ethnic, and religious backgrounds.

These states often strictly enforce their ideologies at the expense of human life and freedom. In July 1977, General Zia-ul-Haq overthrew Prime Minister Zulfikar Ali Bhutto in a military coup in Pakistan. His administration designed a program of Islamisation to establish a theocratic nation-state. This program had disastrous implications, especially for women and minority groups. In 1979, the government passed the Hudood Ordinances. The law enforced punishments in the Quran and hadiths for qazf (bearing false witness, ex. Theft) and zina (sexual activities ex. Fornication and adultery). It made it especially difficult to prosecute rape and other gender-based violence. Stories of women such as Safia Bibi who was sentenced to fifteen lashes, three years of imprisonment, and a fine while her rapist was found not guilty, especially spurred women’s groups into action. Women Artists also joined this fight for their equal protection under the law. 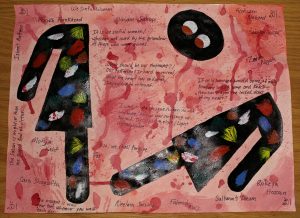 The title of this painting is, “#SayHerName.” The central image is a figure of a woman that I think most Americans are familiar with. I cut the figure in half because of a quotation from Benazir Bhutto, the former Prime Minister of Pakistan and the first woman to lead a Muslim majority country in modern history, “if today a woman has been declared half a man…it is not because Islam has changed…it is because the rulers [and governing ideology] have changed.” The eyes of the figure seem as though they are crying pools of blood on to the page. The background is filled with the names of Muslim women poets (mostly Pakistani) such as Kishwar Naheed, Fahmida Riaz, and Sara Shagufta. There are also seven quotations from poems by them in the background. At the center, where her heart would be, is an excerpt from “The Interrogator” by Fahmida Riaz, “What should be our statement? /Our suffering/Is hard to reveal/What the heart has endured/Impossible to recount.” In America, the #SayHerName movement aims to raise awareness about the violence black women face in the country. I wanted to connect these intercultural and intergenerational struggles in this painting.