Week 4: Devotion to the Prophet Muhammad

All monotheists can proclaim the first line of the shahadah, the profession of faith, “There is no god but God.” However, only Muslims can proclaim the second line, “Muhammad is God’s messenger.” Therefore, the belief in Muhammad as the last prophet is an essential part of the Muslim identity. Before he began spreading God’s message, the Arabian Peninsula was filled with groups of people loosely bonded together by a common language and trade routes. Even though he faced immense resistance and persecution throughout his life, he was able to create a strong network of believers and non-believers bonded together by their devotion to him. He was the charismatic political and religious leader of the nascent Muslim community until his death in 632. 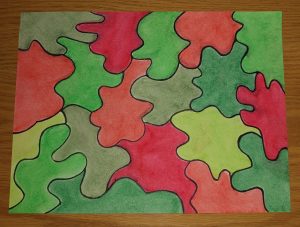 This drawing is called, “The Power of Muhammad.” The political and religious authority of the Prophet is represented by the black line that flows throughout the drawing. The groups of groups on the Arabian Peninsula are represented by the free forming shapes in shades of red and green. These shapes are defined and connected by the black line to create one image like how Muhammad created a strong network of people on the peninsula. 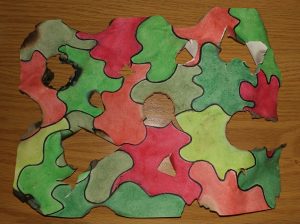 After the death of the Prophet, the network began to break. Some groups that were only loyal to the Prophet wanted to break away from the larger community. His death left a political and religious void in the nascent Muslim community and a crisis about who should succeed him. This crisis eventually led to a destructive civil war and deep fractions which resulted in different “communities of interpretation.” Two dominant communities in Islam are Sunni and Shia. I decided to partially destroy the drawing to represent the crisis and violence that occurred after the death of Muhammad. The hole in the middle is the void that his death left. However, the black line is still visible in the drawing, because despite their difference, their faith and love for the Prophet still bond them together.