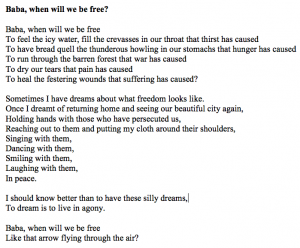 On the tenth day of Muharram, the first month of the Islamic calendar, Muslims gather to commemorate one of the greatest tragedies in all of Islamic history. On that day, Hussein, the grandson of Prophet Muhammad and the leader (imam) of the Shia Muslim community, was brutally killed by the army of Yazid ibn Mu’awiya at Karbala (in present-day Iraq). When Hussein and his followers refused to surrender to Yazid, the army held them at a siege in Karbala without food and water for ten days. On that fateful tenth day, Hussein led a small army into battle. They were all slaughtered without mercy. Among those martyred was Ali Asghar, the six-month-old son of Hussein. During the battle, Hussein cried out to the army to spare him and give him some water. The army responded to his cries by shooting an arrow at his neck and pinning him to his father’s arm.

I was moved by the story of Ali. There was nothing he did in his six months of life that could justify his death. The discussions in class and the lectures about the battle mainly focused on Hussein, Fatima (his mother), and Zaynab (his sister). I decided to write this poem with Ali as the narrator to commemorate his martyrdom. I intended for the poem to be the final conversation between Ali and Hussein just before he died. I used descriptive and emotive language so the reader could emphasize with Ali in the final moments of his life.

The first stanza begins with the line, “Baba, when will we be free,” which he asks his father twice throughout the poem. Then he describes five freedoms he wished thirst, hunger, war, pain, and suffering did not take away from him. In the second stanza, he describes a dream he had about what freedom looks like. In the dream, he returned home and forgave all those who persecuted him and his family. He draped a cloth around the shoulders of his former enemies like how the Prophet Muhammad draped his cloak around the Meccan poet Ka’b when he asked him for forgiveness. He only wanted to live in peace with the other Muslim communities.

In the third stanza, he describes how these dreams only contributed to his suffering. Before he died, he asks his father again about when they will be free like the arrow flying through the sky. Even though the arrow ultimately ended his life, to him it represented freedom because it finally ended his suffering in the material world. The arrow gave him the answer to his question; they would be free in the afterlife. This ending relates to a theme in Shia theology that the righteous are always the ones to suffer, but they will get their reward in the afterlife.

Week 4: Devotion to the Prophet Muhammad