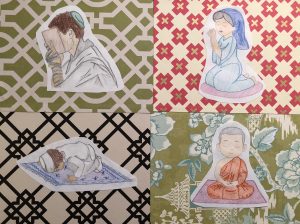 In Professor Asani’s second chapter of Infidel of Love, he notes that “Diversities of language, religion, or race, according to the Muslim scripture, are to be respected as signs of divine genius and opportunities for mutual understanding, tolerance, and compassion between nations and communities.” Of the many themes discussed in the first couple weeks of lecture, this was perhaps my favorite. The notion of the term ‘muslim’ as one that refers to any member of the universal community of believers, regardless of the particular faith that they ascribe to, is one that I find incredibly accepting as a devoted Catholic still eager to learn about Islam and open to any Truths it may hold therein. Discussing the difference between “Muslim” with a capital ‘M’ and “muslim” with its aforementioned, all-encompassing definition, made me realize that believers ascribing to Islam, although confident that Islam is the religion of Truth, are very pluralistic in their conviction that all religions are striving towards the same personal encounter with the Divine.

This quasi-collage of “muslims” pictured above was inspired by this pluralistic outlook. Despite diversities of language, religion or race as Professor Asani mentions, all of these communities of believers are united in their yearning for the transcendent essence that lies at the root of all creation. These differences are not meant to be seen as divisions, but rather as “signs of divine genius” and as chances to grow in understanding of and foster relationships with our fellow man. It is for this reason that I believe so many world religions, traditions and spiritualities hold the celebrated “golden rule” so intimately to their creeds. At their very core, the religiously inclined want nothing more than to spread compassion and to uphold justice.

Professor Asani also notes that “Anyone who is polluted by violence cannot, by definition, be a Muslim. Instead, the faithful need to cultivate within themselves so that they can extend compassion to all of God’s creation.” To be Muslim does not simply require biological happenstance and knowledge of the Qur’an. To be a true Muslim means to recognize that all believers are part of the same family and that they all share a common mission to be the love in whose image they believe to have been created, and to make an effort, however grand or slight, to leave this world a bit more uprightly than they found it.

Week 6: The Significance of Mosque Decor