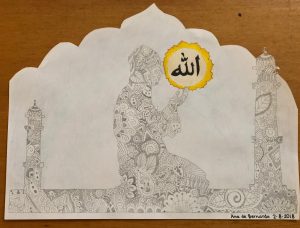 The twenty-fourth surah of the Qur’an reads: “Allah is the Light of the heavens and the earth…Allah guides to His light whom He wills.”

I had a somewhat clear vision of my drawing at the inception of this project and part of it involved wanting to center my design around this theme that likens God to the light that shatters the darkness. The reason I chose the particular surah that I did was because it sounded almost as if it was pulled from my own Christian Bible. One scripture verse in particular came to mind when I was working on my drawing and that was Revelation 21:23: “The city does not need the sun or the moon to shine on it, for the glory of God gives it light.” Something that has consistently struck me from lectures is the realization that modern society wildly misconstrues the Islamic perception of Christianity. Even beyond their perception of Christianity, modern society misconstrues the entire religion of Islam altogether. Professor Asani mentions in his book, Infidel of Love, that “To underscore the essential compatibility between religion and nation, he asserts that the ideas for which Islam stands are, in fact, American ideals.” In other words, Islam as an entire tradition, beyond its theology, is viewed through a lens that is completely contradictory to its genuine credence.

Though I had grown up believing Islam and Christianity were two irreconcilably different traditions, the lectures and readings in the course thus far have shown me that this is not actually the case. If anything, Islam reveres Christianity and acknowledges both the religion and its believers as muslims simply approaching the Divine through a different route. I think this shared analogy that compares God to Light is one of the most profound commonalities between the two traditions. Although the institutional doctrines and creeds may be quite different, the light that pulls the believer out of darkness and into relationship with the Divine is the same.